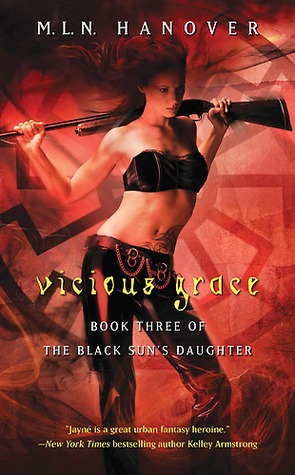 This is the third of the ‘Black Sun’s Daughter’ series of urban fantasies, written under a pseudonym by Daniel Abraham. The first, ‘Unclean Spirits’, was a bit spotty, overfull of angst, shopping sprees and housecleaning, not to mention a certain amount of breathless sex. The second, ‘Darker Angels’, was a lot better in all respects, and this one picks up even more. The plot revolves around Jayné and sidekicks Ex, Chogyi Jake and Aubrey (yes, yes, the names are terrible, and what makes it worse is that the minor characters have perfectly normal names). Jayné has inherited a vast array of property from her nice uncle Eric, acquired during his career messing around with supernatural nasties, in particular ‘riders’, demons which inhabit human bodies. Jayné and pals have to continue his efforts, while not really knowing what he was up to.

The author expertly reprises the key events of the previous books, so even though it’s a while since I read book 2, and I usually have trouble remembering even something I read last week, I was never floundering in the slightest. That’s a skill that few authors can boast. This book involves a summons from Aubrey’s ex-wife Kim, and since he’s now Jayné’s boyfriend, a certain amount of romantic angsting ensues. There are some revelations about uncle Eric, too, who turns out to have been less than nice. Not at all nice, in fact.

For anyone who is put off by characters agonising over relationships and the distressing consequences of using magic to achieve your nefarious ends, this may not be the book for you. Personally, I found this aspect of the story compelling and emotionally charged, bringing some much-needed depth to the characters and their histories. Jayné has to face up to her situation and make some difficult decisions, and she grows up visibly during the course of the story. She’s come a long way from the shopaholic girl of book 1.

The action part of the story is a corker, too. Without giving too much away, it revolves around a vast hospital complex that conceals a dark secret in its basement, which causes some very disturbing things to happen. There’s a part where the hospital begins to change its very nature to counteract the evil within it which is trying to escape. The result is pure horror, very surreal and unearthly.

And then the ending is very dark. Anyone looking for a light, fluffy read should steer well away from this series. For anyone prepared to ponder the nature of friendship and love and sacrifice, willing or otherwise, this book is deeply rewarding. At the end, Jayné makes a decision which raises a whole otherworld of moral issues. It’s complex, very complex, and I salute the author for not shying away from the questions and not making things easy for Jayné.

This is the best yet in this series, with a compelling surface plot, some unexpected backstory, and hints about the meaning of the series title at last. The final line wasn’t too hard to predict, but it’s still an effective hook into the next book in the series. A very good four stars.