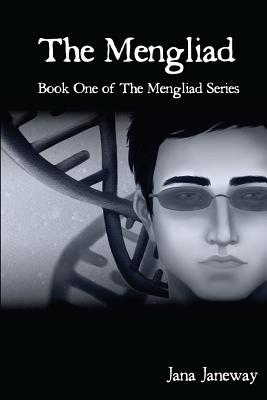 This has an intriguing premise: imagine that half the people you see around you everyday are not, in fact, human. Imagine they look the same, but genetically they’re very different, so they avoid daylight, eat differently… No, no, come back! These are not vampires. I did get worried for a moment, I’ll confess – all that preferring the dark – but these are Mengliads, and they’re quite different from vampires. Instead of drinking blood, they eat — actually, I won’t spoil the surprise by revealing that, but it amused me hugely.

Jessica has a normal, if somewhat dull, life until something happens to revive her dormant Mengliad DNA and she becomes (more or less) a Mengliad herself. I liked that there’s no halfway, blended state, you can only be one or the other. And there are no superpowers in evidence, just a somewhat different physiology. And discovering how that differentness affects her is just part of Jessica’s problem.

Being only the tenth accidental conversion in Mengliad history, Jessica is a target for the scientists who want to research her situation. She’s also a target for the section of Mengliad society who want to keep themselves uncontaminated by mixed-blood individuals, and it’s not research they’re interested in. And both groups want to keep the whole thing under wraps so that regular humans never find out about Mengliads.

The end result is a fast and furious chase to keep Jessica safe and avoid the many bad guys. Now the plot is wafer-thin, there’s a huge amount of angsting and crying and clinging to the hot bloke for comfort, and every third word seems to be italicised for no obvious reason. And you know what? It didn’t matter. This is a lot of fun, there are plenty of twists, the sex is hot, the action is heart-pumping between bouts of angst, and I found myself reading faster and faster to find out how it ends. Be warned, though, the ending felt more like a respite before another outbreak of chasing around.

I’m torn between three and four stars, but the sheer entertainment value (and the hot sex) bumps it up to four. And the opening; isn’t this a great opening paragraph? How can you resist?

It’s survival of the species, and that’s all it knows. Needing a blood meal, the protein necessary to its offspring, it searches the streets of New York for a victim, unremorseful.

Spotting potential prey, it swoops in for the kill. Biting into warm flesh, it takes what it needs without regard to the owner, but danger presents itself, and it can’t obtain all it requires. Another source is vital.

From its vantage point, it doesn’t take long to find. Soft flesh, warm blood, it starts to feast, the task nearly complete.

“Stupid mosquito.” She slapped the insect hard, killing it, and then flicked it off her arm before continuing towards her destination.