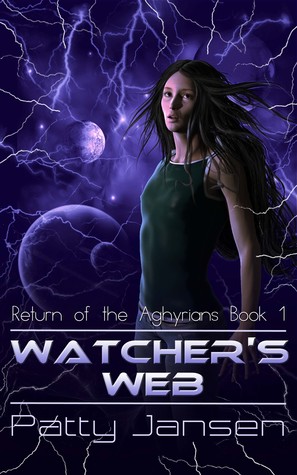 I’m a sucker for a portal story, where the main character falls through some sort of access point into – well, whatever the author cares to imagine (past, future, parallel world, some other planet altogether). It’s always fun to watch the character work out what’s happened, and trying to deal with the new setting. It can be trite, but there’s always room for a fresh take on the idea.

Jessica has always been an outsider. She’s taller than average, for one thing, not very womanly in shape, has some odd birthmarks, and then there’s the whole web of light thing she does with her mind. Useful for dealing with truculent bulls, but it can kill, too, and she’s still not sure how to cope with it. And then one day, something odd happens and the small plane she’s in crashes somewhere weird. As in very weird.

Straight away I like that the inhabitants of this weird place don’t automatically speak English. And they have tails! Yay for humanoids with tails. Although some of their customs do seem to be very, very odd… But they’re not the only people around. This is, in fact, a very complex place, with a number of different species (or sub-species or races, not sure exactly how it works), and some complicated political arrangements. And Jessica is thrust into the middle of it all, seen as a saviour by more than one faction, but not necessarily for good reasons.

I’ll confess I didn’t always know exactly what was going on. Some aspects were deliberately mysterious, like Jessica’s strange mental connection to the man called Daya, and sometimes characters were keeping information from her or outright lying, which made it difficult to follow. Then there was Jessica’s web-like power, which I never fully understood. But the story swept me along and I never worried too much about the details.

Jessica herself is a gloriously independent-minded, spiky individual, the ideal focus for a story like this because she constantly asks the obvious questions that also spring to the reader’s mind. She doesn’t always get a straight answer, but at least she asks, and she keeps on asking. She also makes efforts to avoid being manipulated too much by the people around her, but it’s difficult to know who to trust in this strange new world. She also has to come to terms with her powers and the revelations of her heritage, and that’s a lot to take in.

It was disappointing that such an otherwise intelligent, sensible and together character ended up drawn into sexual relationships which only served to complicate everything. I wasn’t sufficiently drawn to either of the men to be rooting for either of them. Really I was only rooting for Jessica, and longing for her to stand up to both of them and tell them to ^&*% off and leave her alone until she’s sorted out which way is up in this strange new world.

The ending was the usual dramatic high-action affair, with a few things sorted out but plenty of scope for further developments in the series. Overall an enjoyable read, with bonus points for the originality of the setting. Four stars.