I read this is 2011, as a follow-on to ‘Tigana’, and while it avoids the flaws of that work, it has a few all its own. I went on to read ‘A Song For Arbonne’, which I gave 4 stars, and haven’t read any Kay since. I do enjoy his work, but it is terribly over-wrought, and I have to get myself in the right frame of mind for it. My tastes nowadays veer more towards smaller, less ambitious tomes. Or perhaps just writing that doesn’t take itself quite so seriously. 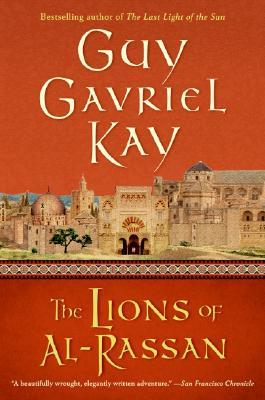 Well, this was a three Kleenex book and no mistake. That’s three boxes of Kleenex, of course. Not a book to read on public transport, unless you have no embarrassment gene. No one does grand tragedy quite like Kay. But I’m not totally sure what genre this is. It’s more fantasy than anything else, but the world-building is lifted more or less wholesale from the real world, and to say the magic is minimal would be to overstate the case. One individual with sporadic visions does not a magic system make. Not that it makes the book any better or worse to have a neat pigeon-hole for it, of course, but still….I regard myself as a Kay fan, but I was surprisingly reluctant to start reading this. My only previous encounter with the author was ‘Tigana’ which I consider a brilliant book, but deeply flawed. Unfortunately, the problems with that book – an over-wrought writing style, too much introspection, a few plot holes, unconvincing last-minute romances – are quite likely to be repeated here. This book is problematic in another way for me, too – it is apparently based on medieval Spain, and the religions are closely modelled on those of the era, only thinly disguised. I find it very disconnecting in a fantasy world to come across anything that reminds me directly of real-world matters. But happily I know nothing at all about that time and place, and ‘Tigana’ was modelled on medieval Italy and that didn’t impinge at all. Altogether, Kay’s writing is (mostly) so good that I absolutely have to read this, albeit with concerns.

Typically, having laid out all these reservations, I was under Kay’s spell again almost instantly. This is partly the old trick of dangling a mystery under the reader’s nose – you have to read on to find out more. What happened to Jehane’s father? Whatever catastrophe befell Alvar? But partly it was just the wonderful evocative prose that drew me in. The prologue couldn’t quite match the tragedy of the ‘Tigana’ equivalent, but it was still hugely immersive. Then it was immediately into the middle of a whirlwind of names and places and sly references to events which the reader can’t possibly understand (but this is standard fantasy strategy). Despite this, the opening chapters are very readable, with events and settings and characters all interesting in their different ways, culminating in the very moving disclosure of what happened to Jehane’s father.

And then somehow, as things move on and the story gets into its stride, everything becomes inexplicably camp and joky and almost silly. Everyone is beautiful and clever and immaculately dressed and three steps ahead of the game. Enemies are easily out-manoeuvred and made to look stupid. The men are super-skilled warriors (or want to be) and/or terribly clever strategists, the women are feisty and opinionated, even the doctor of the low-ranking sect, who should be appropriately subservient, and instead of having her head chopped off for her insubordination, is treated with a chivalrous respect bordering on deference. And everyone has amazing sex, even the religious one who really feels she shouldn’t but somehow just can’t help herself. There’s a certain amount of climbing around on balconies, and writing magnificent poetry, and masquerading unnoticed as a slave, and being tied up by your own wife (one of the feisty women, naturally) leading to more amazing sex. There’s a moment where the two leading male protagonists’ eyes meet across a crowded room which would be in slow motion if it were a film. It could almost be a parody. And for some completely unknown reason, every time one bloke’s pearl ear-ring was mentioned, I had a sudden mental image of Captain Jack Sparrow. And the one with the moustache – Tom Selleck. Very disconcerting.

Fortunately, Kay is a skilled writer who never quite lets things slip out of his grasp into the ridiculous. There’s a lot of introspection and people standing around analysing and explaining things to each other, but just at the point where you start thinking – that’s enough, get on with it – things start happening again. And all that analysing does make it easy to follow the intricacies of the political situation. There’s a lot of jumping about from one perspective to another, and some of the jumping is in time, too, so you hear about an event from one character and later (sometimes much later) see it happen from a different perspective. This is confusing at first, but quickly becomes easy to follow.

The characters are all larger than life, but then sometimes, even in real life, people really are that talented, that charismatic, that brilliant, that far-sighted. The story is about sweeping changes and epic battles and extraordinary times, and maybe that demands extraordinary characters to match. Kay’s skill is in also making them human and believable, which he does much better here than in ‘Tigana’, although a few frailties wouldn’t have gone amiss either. Sometimes one tires of perfection.

The various cities, or the parts we see, are created with a nice eye for detail, although the world beyond is only sketched in with a word or two here and there. The author brilliantly conveys the nuances of the different societies and religions in his world, and the uneasy tensions between them – the pious and unrefined Jaddites in the north, the relaxed and cultured Asharites in al-Rassan, and the fanatical desert-dwelling Muwardis to the south. And caught in the middle, the quiet and learned Kindath, despised by everyone.

Eventually, the story builds to the point where Our Heroes are no longer three steps ahead of everyone else, and start having to react to events, and this is where things really become tense. I do find it a little odd that, just as the continent-wide war is coming to the boil, some of the top warriors start careering all over the place on purely personal business, to rescue two specific individuals, the parents of a friend. I know that Kay is making a point about friendship and loyalty (regardless of faith) here, so I let it pass, but it still seems a little suspect for contracted warriors to just take off like that.

And so the point arrives that has been unavoidable almost from the start, and the reason for all the Kleenex. And even though I guessed it had to come, I still wanted, deep inside, someone to see sense and call a halt to it all. There has to be a better way to settle differences than having the prime of your manhood slaughtering each other on the battlefield. Football, maybe. Going off to the pub and getting plastered and singing maudlin songs together. Pretty much anything, really. The ending actually feels slightly rushed – a quick summary of the war so far, leading to the inevitable confrontation, where Kay totally cheats – he doesn’t tell us the outcome, moving instead to an epilogue twenty years later, with at least two clear pieces of deliberate misdirection before we finally find out what happened. Naughty.

This is one of those books that stays with you. Despite the sometimes overwrought writing style, despite the oddly camp moments, the story has both breadth and depth. The themes it touches on are timeless – duty and honour and the glory of war, as well as the personal tragedy of it. Friendship and loyalty and love and family. The nature of civilisation. Why good men who share love and trust and respect can still kill each other for abstractions like god and country. How honourable and pious people can do unspeakable things to their fellow humans. It’s all very depressing, but then it’s about war and religion so common sense doesn’t come into it. I would have liked a more upbeat ending, but this is Kay’s story and it certainly carries great emotional resonance.

My initial reservations were not entirely without foundation. The setting was too close to historical reality for my taste, and the three religions were too easily equated with Christianity, Islam and Judaism. Kay’s writing style is still highly emotional, but, compared with ‘Tigana’, I felt it was under better control here, and the love affairs were much better integrated – entirely integral to the story and given some depth, instead of feeling like an afterthought. I enjoyed this one even more, and see it as a very worthy five stars.

2 responses to “Five-star archives: ‘The Lions of al-Rassan’ by Guy Gavriel Kay”