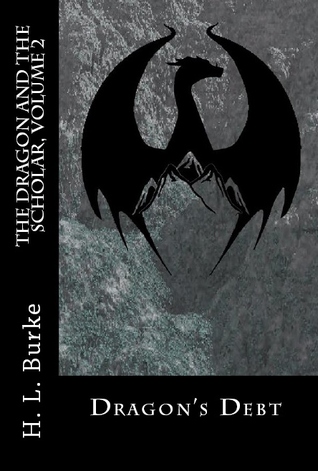 This is the second in the Dragon and the Scholar quartet, and follows on with the story of Ewan (the dragon) and Shannon (the scholar). The first book ended with the two of them flying off into the sunset, but it was a long way from being a happy ending, what with him being a dragon and all.

So naturally, after a pleasant interlude together, things start to go downhill. There’s trouble afoot in the Kingdom of Westshire, which borders our heroes’ own kingdom of Regone. Strange beasties have been snatching young girls from their homes, and Ryan, the heir to the Westshire throne, is set on putting an end to it. Into the midst of this comes Ewan’s brother Edmond, now King of Regone, bent on wooing Ryan’s sister Brighid. Her father, King Riley, isn’t at all happy about it. When things come to a duel, Ewan and Shannon are summoned to help sort things out.

You’ll have guessed from this that the setting is very much the standard pseudo-medieval affair, where men run kingdoms, save maidens from monsters and wave swords around, while women wear pretty frocks and strive to be beautiful. Shannon, fortunately, is the exception to the rule, a trouser-wearing, intelligent, oh-I’ll-do-it-myself competent female, and hooray for that. It’s a pity that Brighid is much more the conventional princess-figure, behaving emotionally and being kidnapped so that the men (and Shannon) can rescue her.

So this is no trope-busting feminist treatise, but it’s a very enjoyable, light read for those moments when you just can’t face another heavyweight grimdark monster of a book. The plot isn’t complex but there’s enough action to keep things bubbling along nicely. And the ending sees a rather neat solution to the political problem by Edmond, which I liked very much.

There’s also a darker, more tragic tone beneath the froth. Ewan and Shannon love each other, but they have the slight problem that Ewan is a dragon. A human under a dragon enchantment, sure, but still a dragon. Ewan’s dilemma is that he wants Shannon to stay with him, but he feels it’s morally wrong to ask, since he can’t offer her any of the sort of things a woman might expect from a lover. He won’t even tell her how he feels, because it might sway her. This is a very real tragedy for both of them, and Ewan’s handling of the situation is truly heroic. A large part of the attraction in this series, for me, is finding out how this situation gets resolved. If indeed it does. My money at the moment is on a happy ending, but it would be brave indeed to take a different route.

An entertaining, light read. Recommended for those in the mood for a traditional-style fantasy, with plenty of humour. Bonus points for the strong ending, and not shying away from the dragon/human problem. Four stars.