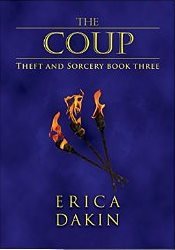 I positively inhaled this book – I just couldn’t read it fast enough. This is the third book in the Theft and Sorcery series. I really enjoyed the first two, but this one is the best of the lot, for me. Although each book can be read independently of the others, there are some characters from the earlier books that turn up here. Big, big warning for those who might find it problematic: there’s a heap of graphic sex in the book, bordering on erotica, and there’s also some robust language.

One of the enjoyable aspects of this series is that there’s a time-skip from one book to the next. This opens up the possibilities for interesting social changes. In the first book, half-elves were slaves, the lowest rung on the social ladder (after full-blooded elves, the aristocracy, and humans, effectively the middle classes). In the second book, the enlightened new queen had freed all the slaves, and half-elves were coming to terms with full citizenship. Another generation on, and there seems to be no social distinction at all. It’s rather nice to see this progression. However, not everything is rosy: there are still those who would divide society down the middle.

The main character this time is Miko, also known as Badger, a half-elf in training at an academy for sorcerers. He’s an unusually powerful sorcerer, and creative with his magic, so not only can he do more than most, but he invents new and ingenious spells too. Oh, and he can do all this by the power of his mind, without using the normal incantation and gesture to trigger the magic. I liked Miko very much, despite his grumpiness (I found it quite endearing) and his unusual background is very intriguing.

The love interest is Aya, also a sorcerer, although less powerful than Miko. This seems like a straightforward boy-meets-girl and away-we-go romance, but the obstacles to happiness are quite major ones, and it’s very understandable that things don’t run smoothly. Miko is naturally pretty upset about… well, many things (not wanting to give anything away). But even though it seems the romance is faltering, the two are still thrown together and the attraction is undeniable. In previous books in the series, the sex has possibly been a more significant element than the plot, but here the pacing works perfectly: the sexual tension builds beautifully and resolves itself at just the right moment. Perfectly judged.

The plot (the coup of the title) is gradually revealed, and then comes the attempt to thwart it without disrupting the delicate balance of court politics. Again, this is all perfectly believable, and I loved the way Miko’s innovation comes to the fore, creating new magical functions as needed. Everything builds to a dramatic climax, but (of course) things don’t go quite according to plan, and this part of the book was even more of a page-turner than the rest. Great stuff.

This was a terrific read, and a great finale to the series, with walk-on roles for all the favourite characters from the previous two books. Five stars for the sheer enjoyment of the read, and the inventive ways Miko finds to exploit his powers.