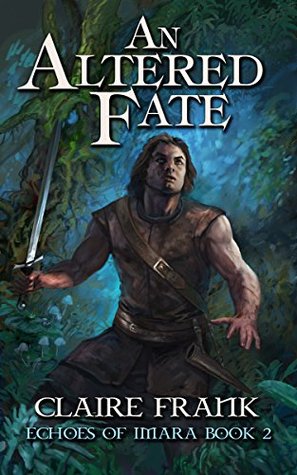 The second part of a series is always a difficult trick to pull off: have all the clever ideas been used up in the first part? Is the plot reduced to dull filler to bridge the gap before the finale? Do the nuances get lost in the rush to ramp up the action a notch? Well, all the answers here are a resounding no: this book is just as absorbing as the first.

In the first book, the villain, Nihil, was defeated, but the results of his experiments are still roaming the kingdom of Halthas. A number of Wielders (magic users) have been altered, rendering them very powerful but also unstable. Some of them have surrendered to the lure of that power, and have become wildly destructive. Others seem to be under better control. The focus of the story is how to manage the altered Wielders: should they be killed? Kept under lock and key for safety? Or helped to manage their powers?

Daro, one of the two main characters, is struggling to come to terms with his own altered powers, and not succeeding very well. But Daro is half Imaran, and the Imarans take him back to Imara to see if they can help him. Meanwhile, his wife Cecily is sympathetic to the plight of other altered Wielders, amongst them Pathius, the missing son of the previous king.

I loved Daro’s excursion to Imara. The first book stayed very much within the confines of Halthas, and much of the story took place in and around the city of Halthas itself, which wasn’t uninteresting but felt like a fairly standard fantasy city and kingdom. But Imara and its inhabitants are indubitably different, with a nicely conveyed sense of ‘otherness’ that I thoroughly enjoyed. There was no real tension to this part of the story, despite some initial hostility towards Daro and some interesting excursions, because I always felt that Daro would survive, but it was fascinating anyway. The Imaran’s home and way of life and the strange, but dangerous, forest they live in, were all equally delightful, but I especially loved their magic, the way they connect with the energy of the world around them.

Poor Cecily has a less interesting time. As in the first book, she seems to spend a disproportionate amount of time sitting chatting over cups of tea, explaining and planning and being terribly ladylike. Cecily is a very powerful Wielder, with some unusual abilities, and I love seeing her using them, but she rarely got the chance to shine. What she did do was to make some dubious decisions, trusting people more on ideological grounds rather than from any logical process. In fact, numerous other characters try to dissuade her, but she manages to convince them all. I’ll be honest, this makes her look soft and not as politically astute as I’d expect for someone of her rank.

Of all the characters, Pathius is the one who resonates the most with me. Cecily and Daro are almost too ‘good’, with few inner conflicts. But Pathius is a man who is truly conflicted, and that makes him interesting. As the heir of the previous king, deposed (in fact, murdered!) by Cecily, Daro and friends, he has the option to pursue the throne. Honestly, I wish he would. It seems to me he has every reason to follow that course. Or he could take the opportunity to reshape his life in a different way.

At the end of the first book, it was revealed that events during their captivity had left Daro and Pathius with a unique connection. Because of Daro’s Imaran bond with Cecily, Pathius is drawn to her, too. I found this a fascinating concept, with many possible plot ramifications. In the end, it didn’t have quite the dramatic effect I’d hoped for, but it still complicated the relationship between Cecily and Pathius, who spend much of the story travelling together, and it may be there are still aspects of this connection yet to be worked out.

The build-up and conclusion were appropriately nail-biting, although I got a bit cross with Daro for constantly trying to protect Cecily from harm and rushing off to tackle this or that problem single-handed. She’s perfectly capable, you know, and the two of you work better as a team. But I have to agree that Daro is quite awesome in full-on combat mode, and his final meeting with Pathius is spectacular, both the visual imagery and the ideas. Very enjoyable.

I do have a few logic issues with the story. For one thing, the altered Wielders now on the loose in Halthas. Some of them have gone to the bad, and have to be destroyed. Some (like Daro) are clearly unstable, but efforts are made to find a way to deal with that. And some are like Pathius and his pals, who appear to be perfectly rational and functional, but common sense suggests that things could change at any moment. Given all this, I found it hard to believe that Cecily would be allowed to wander round the countryside with them, and that no one stepped in to prevent it. It stretched credulity to the limits.

My other big issue concerns history. Much was made in this story of Pathius’ claim to the throne, and whether the nobles would rise up to support him. But this is treason, various characters declared in ringing tones. Well, yes, plotting to depose the current king is indeed treason. Yet this is exactly what Cecily, Daro and pals did a few years back, desposing Pathius’ father, and putting Rogan on the throne instead. It makes me uneasy that I’m rooting for the guys who are traitors themselves (and I am rooting for them, make no mistake). I know the victors write the history books, but still, I hope this issue is dealt with more fully in the next book. In fact, I can’t help secretly wishing that Rogan would fall under a metaphorical bus, and Pathius would end up taking back the throne. Not very likely, I know, but there would be a certain symmetry to it.

And this is the proof of a good story: that I end up wondering where the author will take it next, and what will become of these characters I’ve grown so attached to (yes, even Isley!). And as with book 1, there’s a perfect lead-in to the next part of the story. I can’t wait! A well-written book with a great magic system and some tense combat scenes. The minor issues knock a little off the rating, for me, but it’s still a very good four stars. I highly recommend the series.

One response to “Fantasy review: ‘An Altered Fate’ by Claire Frank”