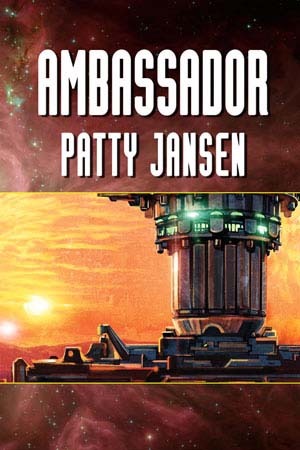 This was a serendipitous find, since science fiction isn’t my usual fare. But having tripped over it, I started reading and was instantly hooked. The book starts with a bang – literally, since almost the first thing that happens is a massive explosion which seriously injures the Nations of Earth President, during a meeting with our hero, Cory Wilson, the ambassador of the title. Cory is about to take up a position as Earth’s ambassador to the united non-Earth nations (gamra) who control interstellar travel. Now, everything is in disarray, his gamra partner has been arrested, and Cory himself is under suspicion. And from here on, the pace is relentless, without a moment for Cory (or the reader!) to catch his breath.

This is as much political thriller as scifi, with various factions chasing after Cory or offering him aid, with the usual problem of who to trust. Cory’s own allegiance is in doubt, as well: is he loyal to Earth, or is he more aligned now with his gamra colleagues? And what did happen to his predecessor, the previous ambassador? Cory’s a likeable character, though, always willing to do what it takes, and never browbeaten into submission. He takes a lot of punishment during the course of the book, but it never seems to stop him going out and doing whatever he feels needs to be done. There were times when I just wanted him to slow down for a moment and recover from one set of injuries before exposing himself to another dangerous situation, but no, that’s not his way at all. So be prepared for near-constant action.

The most interesting aspect, for me, was the distinctive non-Earth races. The Coldi, in particular, were fascinating, with not just different physiology, but very different customs and beliefs. Cory’s relationships with the two Coldi assigned as his partners (zhayma) – Nicha, who is imprisoned early on, and Thayu, his replacement – are wonderfully complex, but also totally believable. The Coldi have the interesting concept of doing everything in pairs, so everyone has a zhayma (a relationship described as like marriage only without the sex). But the mental connection the two share makes it much closer than that. I loved the language differences, too – the Coldi have a multitude of different pronouns for all occasions, and beware the foreigner who gets one wrong! Cory is forever mentally chiding himself for using a slightly offensive one, or, occasionally, deliberately choosing an aggressive one. This is such great detail, which added a whole layer of complexity to Cory’s interactions with the Coldi.

Apart from the Coldi, there are the mysterious Aghyrians, who I first encountered in ‘Watcher’s Web’, and here they are again, with a little bit of history revealed and potential conflict exposed. But the nuances of these non-Earth races are beautifully drawn. The author doesn’t stop to explain anything, you just have to work everything out as you read, but I prefer that kind of immersion. There were times when I didn’t get a reference, but it rarely mattered.

This is an excellent, fast-paced read, with the sci-fi elements perfectly blended with a political thriller and just a touch of romance to produce a terrific page-turner. Great entertainment. A good four stars.