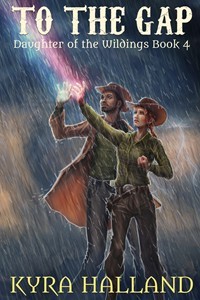 Well, that was a ball of fun, and no mistake. I’ve been loving the whole Daughter of the Wildings series, but I positively inhaled this fourth installment, quite unable to tear myself away from it. For anyone who likes a little fantasy served with their westerns, and a side helping of romance, this is absolutely the series for you. Start with Beneath The Canyons.

Silas is a trained mage from Granadaia, sent to the Wildings as a bounty-hunter, catching rogue mages. Lainie is Wildings-born, with untrained mage power, which taps deep into the natural power of the region. Now they’re married and on the run, while Lainie learns to control her power and the two of them avoid mage-hunters and the hostility of Plain folk (those without magical ability). All they want is a safe place to live, and to be left alone, but those are proving hard to find.

In order to make enough money to escape the mage-hunters, they join a cattle drive, and this part of the story was fantastic fun. Dealing with weather, stampeding cattle, river crossings and possible rustlers while trying to keep their magic out of sight provides plenty of entertainment in the first half of the book. But when they encounter some mischief-making mages, all hell breaks loose and things get very tense.

Silas and Lainie are a lovely pair. In most fantasy that I read, I look for characters that are complex and not solely black and white; a little grey makes things more interesting. But here there’s so much old-fashioned charm in these two that I wouldn’t change anything about them. The side characters could do with a touch more depth for my taste, but it’s not really a problem, since it all fits perfectly well with the western black-hats/white-hats style.

The magic is quite complex, and each book reveals a little more about it, and about how Lainie can use it. There’s also some intriguing political backstory going on behind the scenes, which is becoming more significant as the series progresses. I love the fact that Lainie is both more powerful than Silas, and also more inventive (which is logical, given that she’s untrained; she doesn’t know what she’s not supposed to be able to do!). I also love it when they work together as a team.

The ending is a bit of a humdinger, although not entirely unexpected; not exactly a cliff-hanger, more of a can’t-wait-for-the-next-book moment (and it will be called City of Mages! At last we will get to Granadaia, which I’m desperate to see! Write faster, Ms Halland, write faster!). This book is possibly my favourite of the series so far, enjoyable from start to finish, with an awesome mage battle, and Lainie’s little victory near the end a terrific punch-the-air moment. Five stars.