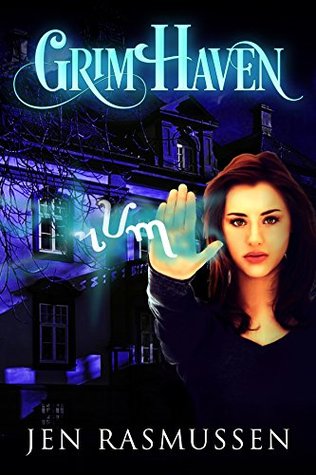 I don’t read a whole heap of urban fantasy, being more of an epic sort of reader myself, but this is a fun, just-one-more-chapter type of read. It’s my kind of book – quirky, original, with a surprise round every corner. When I tell you that the scene that sent shivers up and down my spine involved the bad guys simply walking around a building, you’ll understand that this isn’t your average let’s-hurl-thunderbolts-around urban fantasy. This is Hitchcockian (is that a word?) levels of tension.

Here’s the plot: Verity has her own form of magic, a quiet type that involves writing spells on paper, which she uses for self-protection. She likes to keep a low profile, but an accidental encounter with some unpleasantness of the non-human variety draws her into a centuries-old war. She seeks refuge in her home town, where she’s just inherited an old hotel, but this is not your average American town. Cue all sorts of magicky weirdness.

And then there’s Cooper. Yes, let’s talk about Cooper, who’s hot, has muscles in all the right places, is very cute and – is a chef. OK, that’s unusual but boy, isn’t this better than werewolves and demons and all that other bad boy stuff? What could be sexier than a man who can run up a steak diane and a pavlova at times of crisis? Or, let’s be honest, at any time. And if he happens to be good in bed, too – result!

OK, Cooper is distracting me from the plot… actually, I’m OK with that. The plot unfurls in the usual way, with plenty of twists and turns and a finale that had me holding my breath, it was so tense. And the romance weaves in and out of it all beautifully. Sigh. And there’s a neat twist at the end that sets things up for book 2 in the series rather well. This is a solid, entertaining start to the series, with enough intriguing backstory to both the main characters to keep me reading. A good four stars.