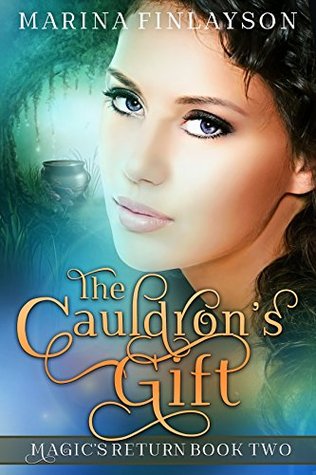 This is one of those series that’s everything I don’t normally read: it’s YA with a teenage girl as the main character, there’s a shedload of school drama and boyfriend angst, it’s written in first person, and, would you believe it, the protagonist turns out to have unusually strong magical powers. As a rule, I’d be running a mile. But this is by Marina Finlayson, the author who seduced me into enjoying werewolves and other shifters, so it not only works, it works brilliantly.

In The Fairytale Curse, Vi and twin sister CJ found themselves spitting frogs and diamonds respectively, while others around them were turned into the sleeping beauty, an ogre and a polar bear. It turned out the Sidhe were escaping from their magical captivity, but Vi and friends managed to lock them up again, at the price of losing one of the four artifacts that kept them there, the magic cauldron that grants wishes (and wouldn’t we all like one of those!). And Vi’s dad is still a polar bear. So in this book, the race is on to find a cure for dad before he becomes so deeply immersed in beardom that nothing can make him human again. And it seems like the only way is to bring that cauldron back from fairyland. Yikes!

This one took a while to get going, but it was never the slightest bit dull and (a huge bonus for me) the events of the last book were skilfully woven in, so that I never wondered what was going on or why. All the characters are believable and behave rationally, not something that can be said for all fantasy. And they’re sympathetic too — my heart bled for Zak, and for the poor neglected ogre that nobody ever seems to think about. There’s a mystery to be solved, as well — who is the traitor helping the Sidhe to escape? Once the pace picks up around the mid-point, it’s relentless and the book becomes unputdownable. As always with Finlayson, nothing is quite as straightforward as it seems, and just when you think everything’s settled, she swipes you upside the head with another brain-rattling twist of sheer brilliance.

A terrific sequel, full of action, believable characters and the author’s Australian humour. Oh, and a starring role for some of Sydney’s great landmarks. Highly recommended. Five stars. Can’t wait to see where this goes next.