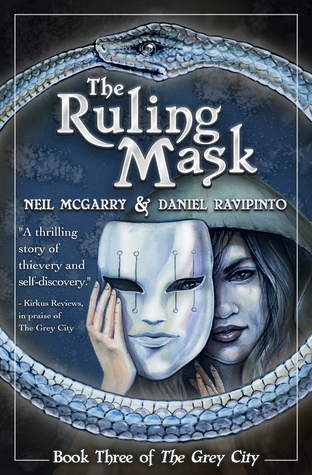 One of the best aspects of epic fantasy, for me, is the way each book in a series opens out the scope of the story a little more, allowing glimpses of previously unseen locations. This book does that, too, and even though almost all the action takes place within the confines of the city of Rodaas, there is much to discover about the place. But what this series does so gloriously well is to draw back the veil concealing the mysteries of the people of Rodaas – its odd history, its religions, its swirling rivalries on the streets and the background of Duchess herself. And in this book, for the first time, we begin to get a good close-up look at the rulers of the city.

This is a plot-heavy book, with multiple threads weaving back and forth, involving the many different political and economic factions of the city. Many fantasy cities feel like those fake wild west towns, where the saloon is nothing but a sheet of plywood propped up as a backdrop to the pretend shootout. Rodaas, by contrast, feels entirely functional and real. The different quarters, the tradespeople going about their business, the beggars and priestesses, the Red and the Greys, the lightboys and ganymedes, and all the multitude of administrators high and low, and every last one of them is operating according to his or her own agenda. To be honest, I found it hard to keep up with, but that’s not a criticism, it’s high praise. There are vanishingly few books that have so much depth.

But it’s the characters that shine, for me. Not just Duchess herself, but Lysander and Castor, Jana and her brother, the oddball scholar Cecilia, and a whole range of minor characters. Castor became a more significant player in this book. In the previous book, he seemed to be something of a plot device at times, disappearing when convenient, then reappearing just when Duchess needed him. I never minded (I’m a sucker for a warrior-type), but in this book a lot of the odd aspects to him finally start to come into focus, and that gave me goosebumps. Hearing snippets about Duchess’s brother, Justin, also gave me goosebumps. We’ve already seen what happened to her sister, so I hope we eventually catch up with the brother again.

Once again the climax of the story is a seemingly impossible task for Duchess to accomplish, but this is becoming a little predictable now, especially since Duchess’s specialness is ever more apparent, and the likelihood of failure is small. There were one or two elements in the book that seemed unnecessary (the Coast Road, and Aaron’s actions), put in just to wring out some extra emotion, but I’ve thought that before in this series and found there was a deeper significance, so I’m trusting the authors on this.

Overall, this is a deeply thoughtful and well-written series, up there with the best of them, which rewards careful reading. So why only four stars? It’s a personal issue – when a series is as multi-stranded and deep as this one, yet there long gaps between books, I find it impossible to remember all the details of what happened previously. Without either a summary of the story so far or a list of characters, even with careful exposition (which is the case here) I miss a great deal of the more subtle nuances. The failure is mine, not the book’s, but it still diminishes my enjoyment somewhat. For anyone whose memory or ability to pick up subtle clues is better than mine, I commend this book to you. It’s also the sort of series that would reward multiple readings. Four stars.