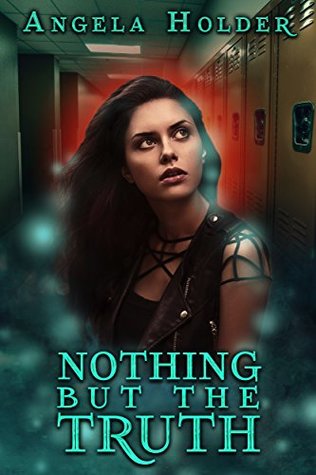 I’ve had some mixed experiences with Angela Holder’s writing in the past. White Blood was a wonderful 5* read for me, a quirky and original story based around an unusual heroine, a wet-nurse. But the first part of her Tevenar series, The Fuller’s Apprentice, was a less resonant read. I enjoyed the intriguing magic system, the detailed world-building and the philosophical points raised. I was less enamoured of the glacially slow pace, the info-dumping and the lack of plot development, so much so that I never managed to get round to reading the rest of the series. The writing was uniformly excellent, however, so when I saw this new book out with its intriguing premise, I had to give it a go.

Nothing But The Truth depends upon the conceit that Allison, the main character, has a physical reaction to lies. If someone lies in her vicinity, she’ll either throw up or get violent pains in her head. The stronger the lie, and the nearer she is to it, the worse the reaction. Now this is a neat idea with all sorts of possibilities, and the book opens with Allison struggling to manage in a typical high school, full of the sort of small and large lies that teenagers tell every day. She leaves school to start homeschooling (a sensible idea), and meets a group of somewhat eccentric other homeschoolers, among them Asperger’s boy Charlie and cautious, sensible Lindsey. This part of the book is excellent, and when a former school friend is murdered, Allison and her new friends set out to put her lie detection ability to good use.

So far so good. However, as the friends progress with their investigations and become increasingly involved with shady goings on, the story starts to go off the rails a little. There were several times when, despite Lindsey’s hand-wringing over how dangerous a thing was, they did it anyway, got into deep trouble and had to be rescued by the cavalry (grown-ups, mostly – the main characters are all mid-teens). And the resolution of the murder and the teacher’s behaviour were both too simple for my taste – I’d have liked something a bit deeper, or just more subtle. And after rather a nicely-done showdown with the Big Bad, the ending, almost an epilogue, was positively glib, and (frankly) a bit dull.

Despite all that, I enjoyed the read, and raced through it to find out if it turned out the way I thought it would (it did). There was a moralistic tone to the story, which, while being appropriate for the situation and the age of the presumed audience, felt a touch heavy-handed to me, but the writing was up to the author’s usual standard, and I enjoyed the mixture of characters. I would have liked more detail about some of the minor characters – Allison’s mother for instance, who was constantly off meeting clients. I wondered what sort of work she did, and a part of me hoped it would be something magic-related, but we never find out. And Charlie’s parents don’t show up at all until the end. But these are very minor quibbles. The intriguing premise, great characters and terrific readability make it a four star read for me.