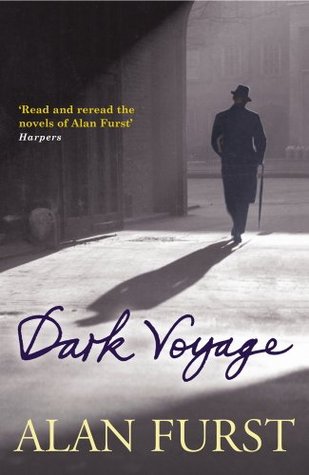 My book group throws up a mixed bag of reading materials, and I never quite know what I’m going to get. This one seemed most unpromising at first glance: a war-era story of spies and secret missions aboard a Dutch freighter commandeered by British intelligence. Um… not really my thing. But after I chickened out of a few, I’m determined to have a crack at everything from now on so I settled down to read.

And (surprise!) I really enjoyed it. It’s very much a boy’s own adventure, with lots of creeping about in the dark, secretly repainting the ship to disguise it (not an easy task), and never quite knowing who is on who’s side or what the ultimate objective is. There are some truly thrilling moments steering through minefields or arriving at a neutral port to find that it’s changed allegiance overnight. There are also laugh-out-loud funny moments, as when the supposed Spanish captain (in fact a very lowly crew member) is produced for the benefit of a German U-boat, and turns out to be gloriously drunk. I didn’t follow all the wartime nuances, but it didn’t much matter.

The main character, phlegmatic Dutchman Eric DeHaan, resignedly does everything that’s asked of him, even the obviously suicide-mission final job, in the desire to do his bit for the war effort. His motley crew of many nationalities goes along with it too, in the main, with only a couple making a run for freedom. There’s a gratuitous little romance, which never really rang true, and an oddly unexplained spy who’s important enough to be ferried around Europe, but then vanishes again at the end (this is a motif of the author’s, apparently, and the character turns up in multiple books). And although I’m far from an expert, the historical and nautical details were utterly convincing to me. An enjoyable read. Four stars.