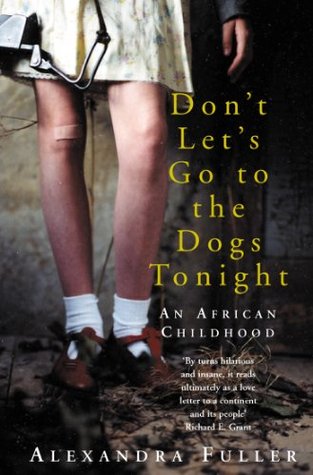 Another book group read that I would never, ever have chosen for myself, but I enjoyed it, on the whole. It’s a memoir, describing the author’s life growing up in Africa in the 70’s and 80’s, a time of great transition, including civil war, land seizures and the gradual erosion of white dominance. It’s an unflinching look at the realities of daily life for one extraordinary family, for whom the word disfunctional was probably invented. For me, it was uncomfortably too unflinching, but one has to admire the author’s clear vision of the reality of the times – the casual racism, the poverty, and dear lord, the many and various horrible ways to die or (if you were very, very lucky) merely be extremely ill, repeatedly.

The greatest triumph of the book is the glorious evocation of Africa in all its physicality. To say you felt as if you were there doesn’t quite do it justice. The lyrical passages describing the scenery, the wildlife, the plants and smells and sounds of the continent are exquisite, but towards the end of the book I did begin to tire of them just a little. The people are described more by their actions than anything else (and very odd they were too, sometimes).

The story-telling is episodic, and reads as though the author simply made a list of all the most memorable events of her childhood, and then fleshed each one out to a greater or lesser degree. Some are very short indeed, and it makes the book feel quite jerky and choppy. There are some pretty tragic events, too, so be warned.

There was a lot more I would have liked to know, especially about the family – what sort of background did they come from? Why were they in Africa at all? And why did they think the children were better off living with all the dangers of driving through mine-fields to go to school, for instance, when they could have been safe at boarding school in Britain? Nevertheless, this was a fascinating read. Four stars.