The Dragon’s Egg is the sixth book set in the Brightmoon world. It’s a fully independent stand-alone book, but there are references to events and characters from several of the previous books which will be more meaningful to those who’ve read them all. In particular, you’ll meet Allandra, Zak and Xando again, previously seen in The Magic Mines of Asharim. And for fans of Tella, last seen escaping at the end of The Mages of Bennamore, this is where you find out what she did next. 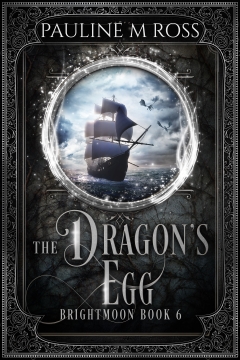 A dragon’s egg falls from the sky. What hatches from it is not a dragon, it’s a child called Dru. She looks different, doesn’t say a lot, and likes to talk to the chickens, though they don’t listen much. And when flames emerge from her fingertips, her family realizes it’s time to find out who and what she really is.
Garrett’s been many things in his time… street hustler, warrior, professional gambler, spy. He’ll do whatever’s asked of him, legal or not. Now he’s paid to search for those with a touch of magic in them. But magic is unpredictable and hard to find, and he doesn’t have much luck until he meets Dru. There might be real power behind her strangeness, if she could only learn how to reach it.
When his employer asks Garrett to escort Dru on a journey, accompanied by a scholar, a princess, a guard and a priest, it seems like a simple enough mission, until they fall into the hands of raiders. Garrett’s lived on his wits all his life, but he’ll need all his talents, and a little magic too, to get them out of this mess and reach safety.
If he can manage that, maybe he’ll find out the secret of the dragon’s egg, and the girl who hatched from it.

The Dragon’s Egg is written by Pauline M Ross, with a cover design by Deranged Doctor Designs and proofreading by Coinlea Services.