The Plains of Kallanash is an epic fantasy adventure with a strong romantic element. It is now available for sale:  buy now. If you buy the paperback, you can also download the ebook version completely free. 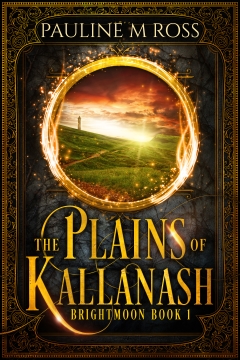 What happens when you stop fighting an endless war and start asking why?

It’s not easy being the junior wife. Mia’s only dream is to catch the eye of the dashing lead husband, and her sister’s unexpected death gives her the chance at last. But was it just a tragic accident? Mia’s not sure, but if she asks enough questions, maybe she’ll find out. Or maybe she’ll uncover too many secrets, and suffer a terrible punishment.

It’s not easy being the junior husband. For years, Hurst has longed to test his sword against the barbarians in the wilderness outside his orderly world, longed to take the lead, longed for Mia. He’s bided his time, seething with resentment, so when his chance comes, he’ll fight to the death for her, even if it tears the marriage apart.

But there’s far more at stake than one marriage. When Mia’s taken from him, Hurst will risk everything to save her, even if it means taking up his sword against the barbarians, his own people, and the gods themselves. And that’s when they discover what their world is really like, and who they’re really fighting.

Yet there’s one secret they don’t expect to uncover: because everyone knows there’s no such thing as magic, right?