Posted February 13, 2022 by PaulineMRoss in Brightmoon world, Current writings, The Return of the Mages / 0 Comments 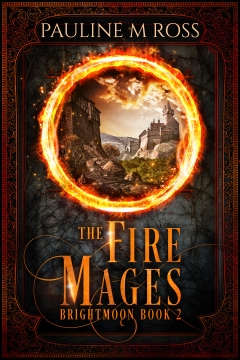 Part of the job of compiling my series bible is to reread all the existing books, to get all the multitude of details straight in my mind and documented, and to avoid conflicts with the new book. The Plains of Kallanash, the first book, is a mammoth tome of 220K words (which any half-sensible person would have turned into a trilogy), inspired by the idea of multi-couple marriages. That led me into some very strange places, and things got extremely complicated. I decided to start my reread with something simpler, The Fire Mages, a more traditional fantasy trope of the humble no-account person who turns out to have amazing powers. Not quite the farmboy turned heir to the kingdom, but something along those lines.

As with all my books, I had no clue initially where the story would end up. All I had was the first line (‘I was fourteen when the Kellon’s Steward first came for me’) and some vague ideas about heroine Kyra’s powers. I’d decided to write in the more immediate first person, rather than the more distant third person, and Kyra’s would be the only point of view. Simpler to write, and also (I hoped) simpler to read.

I’d thought it would be weird reading my own work from almost ten years ago (it was written from May to October 2013), but actually it held up pretty well. It was a quick, easy read and there were very few places where my more experienced self winced and thought: I should have done that differently. One mistake was in my oh-so-clever naming of days as ‘suns’. So my characters might travel for three suns, wake up late the next sun or be busy for all the hours of the sun. It was tedious to remember for this book, but when I came to write the sequels, boy, did I regret it.

There is also one logic error in the book, pointed out to me in a review. My principal mages recognise each other by way of a clearly visible aura, but towards the end of the book, when Kyra is deprived of her magic but then manages to regain it, that should be obvious to the villain by the return of her aura. But he doesn’t notice. Oops. I put in some weaselly explanation in a later version of the book, but I really should have remembered that.

I actually enjoyed rereading this far more than I should have done, and whizzed through it in two days. I’d forgotten just how much fun fantasy is. Oh, the power to create entire societies at the drop of a hat! Some of the recurring features of my books show up here. The heroine’s love of cakes, for instance. A hero and heroine who are not traditional hero(ine) material, and are, in fact, deeply flawed. Hero Cal is mercurial, intense, weedy. Kyra is small and plump, happier with her books than in politics. She’s utterly logical, not empathetic (and I’m like that, too, so I have some sympathy).

The best part of fantasy, of course, is the magic, and in this book there are two types. Firstly, spells are written (scribed) on magically imbued paper and burned in a crucible with suitable ritual. Anyone who can write accurately can be trained to do it, so no special skill is needed. There are also mages, who instead use a ‘vessel’ which can be filled with magic that they then call upon by incantation or by simply thinking the words of the spell. It’s not clear whether mages need any special ability, or whether anyone could be trained to do it. All the spells are written down in books and can be learned that way. The spells used to work more effectively, but now they’re more variable and the mages’ abilities have lessened over time. I think of this as the magic fading as they’re passed from generation to generation, like taking photocopies of photocopies. More likely it’s because of minor errors creeping in over the years.

The other form of magic is innate. All humans are born with a ‘connection’ which might be something relatively trivial (to mice or mushrooms, say) or it could be powerful (to water or wind, say). But Kyra and Drei both have a connection to magic itself. I wasn’t really aware of this as I wrote the book, I just knew that they had powers but I didn’t know why or how. I hadn’t then worked out how the Brightmoon world worked, so the magic is fairly vague and unspecific. In The Plains of Kallanash, Mia had the ability to see into people’s heads and read their emotions, and Dethin could do the same with animals, but I had no idea why, or why there was so little magic on the plains.

If anyone thinks I spent years developing the magic system for Brightmoon before starting to write – not so. It just grew and crystallised a little more with each book. Which is perhaps why it ended up so complicated. Some authors can take a very simple idea and build a whole world and series around that (I’m thinking of Glenda Larke and her Stormlords trilogy, for instance, where the only magic was a control of water, but boy, did she manage to spin that in a score of fascinating ways). Brightmoon isn’t like that, but the multitude of magic systems, creatures and artifacts gives me myriad possibilities for The Return of the Mages. Almost too many possibilities.