Posted February 28, 2022 by PaulineMRoss in Brightmoon world, Current writings, The Return of the Mages / 0 Comments 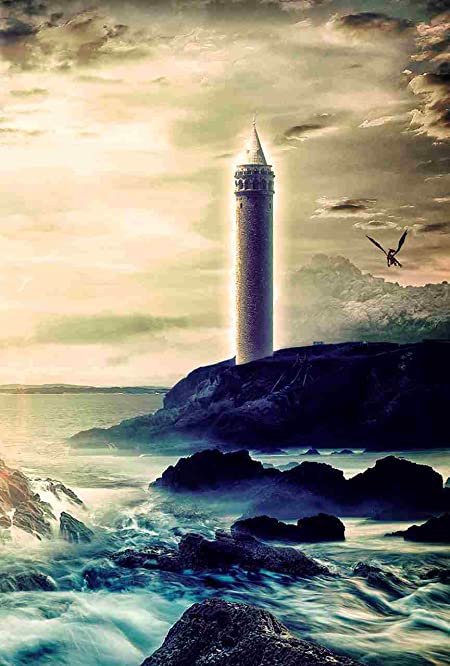 ‘The hour bells sounded, reverberating through the tower, then faded to silence. Mia and both her husbands were on time. Tella, her co-wife and sister, was late.

‘Across the table, Hurst tapped his fingers on the polished wood. Jonnor rose, paced twice round the room, pausing to look through the tower window at the everyday life of the Karning below, then took his seat again. Although they were cousins, the two men were not alike. Hurst’s rough features and plain brown jacket made him look like an ordinary Skirmisher, rather than a Karningholder. Beside him, Jonnor looked like a prince from the old stories, his blue woollen coat enhancing his figure.

Mia forced herself to take her eyes off him. She smoothed away a crease in her russet tunic, then stilled her hands.’

So begins the first chapter of the first book in the Brightmoon series. But it wasn’t the first thing I wrote. There were at least four attempts at an opening chapter before this, posted one by one on Scribophile, an online critique site, and each one scrapped as unsatisfactory. In the end, I settled on this one for two reasons: firstly, that it throws out that comment about two husbands, so starting off with the central conceit of the book, the multi-couple marriages; and secondly, it opens with all four of the principal characters either present or under discussion. I’m not totally happy with it, even now, but it will do.

Here’s a snippet from the first chapter:

‘Mykon de Harwood lay in the darkness, his heart pounding. For an instant, he was confused, unsure why he was awake. Then the alarm bell boomed again, sonorously far above, shuddering through the thick stone walls. By instinct he rolled over and swung his legs off the bed. The bare stone floor was closer than he expected, and he scraped his knees. He grimaced, reminding himself he was no longer young enough to leap unguarded from his bed. Scrambling to his feet, he stepped across the discarded clothes towards the door, feeling for the jar of tapers on the shelf beside it. He fumbled with the case of the night lamp above the door, got the taper burning and lit several lamps around the room. He would need as much light as he could get.

‘As he hustled into his underclothes, collecting them from chairs and floor, Elanor was sitting up in bed, blinking in the sudden light, her hair falling loose about her, hiding her nakedness.

‘”You ordered a muster practice, my husband?” Her tone was teasing, not understanding yet, for the great bells on the roof were still sounding the general alarm. It took a while for someone to run down to the yard to find out the reason for the alarm, and then convey the information all the way up to the bell ringers on the roof.

‘”Not a practice,” he muttered, opening the lid of his box with a crash and pulling out his travel roll and saddle bags. He set them on the floor, and methodically checked the contents, although he already knew everything was in order. His gear was always prepared. “Have you seen my trousers?”

‘”Not a practice? How…? Oh!” He saw her face change in an instant as she realised that this alarm was not at his command. “This is real, then?” Her voice sank to a whisper, and he could hear the sudden fear. He turned and smiled at her, his concern for her momentarily overriding his haste.

‘”No need to worry, it will be Beach or Cliff again, I daresay. We will gallop for the coast, and be turned back before we are halfway there. Ah, there they are! How did they get over there?”

‘Below them, he heard crying for an instant, as a door opened and then closed again.

‘”The children…” she said, reaching from the bed to retrieve her undergown. “I should see to them.”

‘”The others will take care of them. You had best go to the yard. There will be a great deal to be done after we leave.”

‘For a moment she stared at him, but then she nodded and began to get dressed too. For some moments they were silent, moving around each other in a delicate dance, she weaving to keep out of his way, he with the lightfooted grace of the professional swordsman. He thought of the same moves going on in almost every apartment in the tower – the men retrieving boots, checking battle gear, panicking slightly, not wanting to be last, and the women terrified, crying perhaps, trying to help and getting in the way.

‘The bells stopped suddenly, and they both stood, waiting, listening. Mykon knew what would come next, but still he paused for the signal. The booming began again, the five bells resounding one after the other, the rising tones echoing through the tower, telling everyone what was happening beyond any doubt. Incursion!’

But even that was not the first thing I wrote. Long before all this (years before, actually), the idea of these warriors infected my brain and developed into some kind of… not a story, exactly, because it had no beginning and no end, but a lot of middle. And so that I could find out what my brain was full of, and explore this strange new world, I wrote it all down. 1.2 million words of middle. Probably it will never see the light of day, because it was just characters walking through the landscape, and I haven’t looked at it for donkey’s years, but here, if you want it, is the actual starting point of the Brightmoon world (forgive the terrible writing, it was a long time ago!):

‘Jaymion walked briskly along the track, his boots making no sound on the deep carpet of needles covering the forest floor. It was not long before the path emerged from the trees, and he found himself looking across open grassland to the lake, its reeds gently rippling, and beside it, the village. Behind the sheltering woodring, smoke rose and he could hear the sounds of activity – a saw working, an echoing hammer, children’s voices. Despite leaving the refuge before dawn, it was now almost midday and the farmers were hard at work.

‘He had been surprised and pleased to be given this task, given how much hinged on the outcome. He would have supposed that one of his brothers or cousins would be better suited. He was only twenty-two years old, and had no experience of high politics. But they had all agreed on it, and it was only messages, after all, a simple enough matter.

‘The overnight frost had cleared, and the track was soft and springy under his feet. A skitter of birds rose abruptly as he passed. From the village, he heard the voices of beasts, mostly still confined to their barns at this time of year. His track joined another, coming up the valley from his left, and he turned onto it, with the woodring now looming across his path. It wasn’t long before he entered the trees, but this time it was not the towering canopy and tangled undergrowth of the untamed forest, but the gentler managed woodlands which provided the village with furniture, plates, building materials and firewood.

‘He had almost reached the open again when – thump! thump! thump! – three shapes dropped from above, falling almost at his feet. Instantly he was reaching for his missing knife, but the moment passed almost as quickly, as the three shapes giggled. Children! Three of the village boys, perhaps nine or ten years old, two with the red hair characteristic of the High Mountains, the third with dark, almost black hair, clear grey eyes and … He caught his breath. The two red-haired boys were equally transfixed. The dark-haired boy gazed back at him, only slowly realising the oddity of the situation. After a long moment, they all started to laugh.

‘He had heard how alike there were, but it was extraordinary to see the boy, almost like looking in a mirror. The boy smiled suddenly.
‘“Have you come to visit us?” he said.

‘“Indeed I have. Will you show me where I can find your father?”

‘The boy nodded and tucked his hand into Jamie’s. The four of them walked the short distance to the village, the red-haired boys running ahead and vigorously ringing the bell hanging above the gate. By the time they had walked up between the fields, there was quite a group of people waiting in the plaza to receive him, coming out of the various buildings, throwing on shawls and cloaks against the cold.

‘For the first time he felt some nervousness. He had never walked into a village like this, openly, in broad daylight, surrounded by farmers and trusting to their friendliness. But they were all smiling, exclaiming at his likeness to the boy, chattering happily, with children and chickens running round them in excitement.

‘A group of the children had run off to the other end of the village to find his brother – the children never seemed to walk anywhere, they were always running, and even when they were not going anywhere they raced round and round – and he waited, not quite sure what to do, whether to speak, or bow, or simply wait.

‘The farmers clustered together, leaving him standing a little apart. One of the women came to stand beside him and addressed him in the High Language with a little smile.

‘“In the name of the Fathers of this land, I, Elanor, greet you.”

‘He turned to her, and automatically gave the response, “Under the sun and the stars, I, Highlord Jaymion de Harwood, return your greeting.”

‘He bowed formally to her, clicking his boot-heels together, and clenching his right fist on his chest. She smiled, and bowed in the manner of the farmers, a slight inclination of the head, touching one hand to the forehead.

‘And so here she was. His brother had told them so little about her, this wife that none of them had ever seen, and yet somehow it felt perfectly easy to be standing here, exchanging the language of the Highborn with a farm village woman in a shawl and carrying a baby. And she was beautiful, that was unexpected.’