Yes, folks, the story that started in The Fire Mages and continued a generation later in The Fire Mages’ Daughter now reaches its dramatic conclusion, as Drina and the two men in her life, Ly-haam and Arran, are forced to make difficult and dangerous choices to defend their country from new threats. The Second God is currently just $2.99 for a short time, and The Fire Mages’ Daughter is just $0.99. If you’d like to pick up a copy of The Fire Mages too, hold off until 3rd October, when it will be FREE. All these discounts are available worldwide for the Kindle. If you have a subscription to Kindle Unlimited or Amazon Prime, you can borrow all three books free. You can also buy the books in paperback, and download the ebook free of charge. Click the cover image to be taken to your local Amazon. Here’s the blurb […]

When I first became a self-published author, I was right at the very bottom of the pecking order, in author terms. I had no previous published history with a major or independent publisher. I’d never had a short story published in a magazine. I had no fanbase, no mailing list, and my blog had maybe three people following along. I’d hung around the forum at Kboards (the Writers’ Cafe), for a while, so I knew a little bit about starting out. I knew enough to get a professional quality cover, for instance, although not enough to know what sort of cover was needed (luckily, my cover designer did, and came up with a great set of well-branded and striking covers). I knew to have other eyes look at my work before tossing it up on Amazon. I paid a proofreader to tidy up my wayward punctuation. But there was so […] 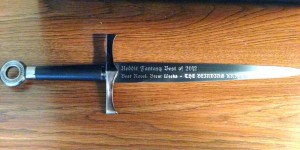 It’s the time of year when blogs and forums all over the internet compile their best-of lists, and some of the bigger ones have proper awards, with nominations and voting and so on. This wouldn’t normally affect me much. I usually haven’t read most of the books nominated, haven’t even heard of a lot of them, so I vote for the one or two I’ve read and off I go. But sometimes an amazing thing happens – you scan the list of nominations, and find YOUR OWN BOOK! Yes, folks, The Fire Mages has received a nomination in Reddit’s r/Fantasy Stabby Awards, in the self-published and independent category. Which leaves me almost speechless with joy, even though I have zero chance of winning (there are some fantastic books in that category). So thank you, thank you, thank you, whoever nominated the book – you made a small-time author very happy. […]

I don’t often post about the reviews my books receive. Reviews are really for readers, a way for someone who’s read a book to summarise what they liked and disliked about it, so that potential readers can judge whether a book is their cup of tea or not. So even a negative review can be helpful. Some reviews of my books say that they’re long or have slow patches or that the main character is hard to like. I wouldn’t argue with any of that. And it means that anyone looking for a fast, action-packed story with a likeable main character will know to move along. A review complaining about explicit sex or swearing will warn off readers who would find that disturbing. A review praising the gender equality in my worlds will alert readers to the possibility of something a little outside the norm. So all reviews are useful. […]

There seems to have been a lot going on lately, what with the launch of The Mages of Bennamore, various other promotions, and the ongoing projects of the next book, and the one after that. So here’s a quick rundown on the state of play. Weekend promotions This weekend (6th and 7th June) two of my three books are specially priced. The Plains of Kallanash is at $0.99 (US/UK Amazons only, sadly) and The Fire Mages is free in all Amazons worldwide. This is a great opportunity to complete your collection if you haven’t already got all three books. Click the links to take you to your local Amazon to buy. The Mages of Bennamore Release date was 15th May, with 34 pre-orders and a nice little surge of sales to get things underway. Then I had a week of promotion set up – paid advertising every day, with the […]

Posted June 6, 2015 by PaulineMRoss in Current writings, The Fire Mages, The Fire Mages' Daughter, The Mages of Bennamore, The Magic Mines of Asharim, The Plains of Kallanash / 0 Comments
Read More »

Yes, you can get The Fire Mages completely free, from all Amazons worldwide. This offer is only for today, Sunday 24th June. Click here to buy from your local Amazon. You can still get The Mages of Bennamore for just $0.99 (or equivalent) but only for a couple more days. After that, it will be at its normal price of $3.99 (or equivalent). Readers in the US and UK will also be able to pick up The Plains of Kallanash for just $0.99 or £0.99 from 1st – 7th June. So many special offers! And if you already have the books – thank you, but please tell your friends about these deals.

My first epic fantasy book, ‘The Plains of Kallanash’, was published in September with no promotion, apart from me wittering excitedly on social media. It performed exactly as you might suspect (around 60 sales in the first month before flatlining, and only 3 reviews). I always intended to delay heavy promotion until I had at least three books out, but the new book, ‘The Fire Mages’, is a much more marketable candidate (coming of age, young girl finding her powers, loads of magic), so I wanted to give it a bit of a head-start without pushing the boat out financially. The plan was to keep it at $0.99 for the first two weeks after release, combining that with some promotion every day. The first week would be smaller sites, with the big hitters in the second week. The objective was to generate steady sales which would give the book some […]

With ‘The Fire Mages’ now out, I thought it might be interesting to look at the way magic is used in the book, and compare it with magic in ‘The Plains of Kallanash’. WARNING: slight spoiler for ‘The Fire Mages’ at the end. ‘The Fire Mages’ is set in the realm of Bennamore. Magic is invoked by the use of spellpages: a trained scribe writes out the words of a spell using magically imbued paper, pen and ink. A special script is used, with many flourishes and symbolic additions to each letter, which can subtly modify the spell, for instance to change the strength, to add constraints or expand it. The spellpage is then burnt in a crucible, with an invocation to the gods: “By the sun, bring light and fire and colour; by the moon, enable the darkness.” The Bennamorians believe that the gods are the final arbiters of […]

Just a reminder that ‘The Fire Mages’ is still available at the new-release price of $0.99. To buy, click the link in the box at the right, which takes you to your local Amazon. You have a few more days to buy before it goes to the normal price of $3.99. If you’ve already bought it – thank you! Please tell your friends about it, too. And if you’ve read it, an honest review on Amazon, Goodreads or your blog would be very much appreciated, to help other readers decide if they would enjoy it. The book has had a few reviews already. Here’s a snippet from the first to hit Amazon.com: “The main characters were more authentic than I think you usually get in fantasy stories, but just like Robin Hobb, Ross is a master at crafting authentic characters. This story had everything I look for in a fantasy […]

My new epic fantasy ‘The Fire Mages’ is now available to buy at all Amazons!  The first review at Amazon.com starts: “I could not put this book down. The pacing was perfect and kept me engaged from beginning to end.” For the next two weeks it will be priced at just $0.99 (regular price $3.99), so this is a good time to pick up a copy. The paperback is also available, at a regular price of $11.99, but Amazon is offering it at $10.79 at the moment, and if you buy the paperback you get the ebook for free. If you have a subscription to Kindle Unlimited or Prime, you can also borrow the book for free. ‘The Fire Mages’ is an epic fantasy coming of age adventure with (naturally!) a bit of a romance. It’s 150,000 words, or 386 pages. Here’s the blurb: Kyra has always been drawn to […]