My cunning plan to reread all nine of the published Brightmoon books got bogged down in the pesky business of releasing a new Regency romance, so I’m a little behind schedule with the reading, but in the meantime, I’ve been thinking a little bit about maps.

Every self-respecting fantasy has maps, right? Well, mine didn’t, partly because the early books were fairly localised, so there wasn’t really much need for one, so it was quite a long time before I started doodling on bits of paper to try to pull together the various places. But largely, I confess, it was because I didn’t know anyone who would make one for me and I didn’t have the skills to do it. Not an insuperable problem, probably, but somehow I never got round to making a full map of the Brightmoon world, beyond those doodles.

But then along came The Second God, with a full-blown war with multiple factions, spread over quite a large area. Suddenly, I needed a map, and I realised my readers would need one too. Luckily, at that time I had an online friend with the skills or software or both to do something about it, so I ended up getting her to turn my back-of-the-envelope sketches into something a bit prettier. 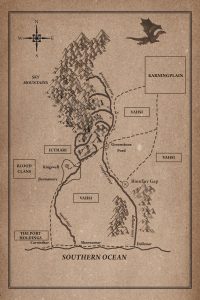 Of course, that’s a very small part of the Brightmoon world, and I know I’ll have to come up with a proper map eventually. Being a control freak, I’d really like to do it myself, but there’s that tricky business of not having a clue, or the software to help. But many moons ago, I supported a Kickstarter for some mapping software, called Other World Mapper. They got their funding and they’re still developing it, so every so often I get an email telling me about a new version. One of those came in a few days ago, so this time I actually downloaded the software and started playing around with it.

And actually, it’s pretty cool, it has lots of flexibility and it has a help file, but like a lot of help files, it’s better at telling you what all the cool gadgets do than explain basics like how do I draw an island, and how do I add a mountain range. Happily, YouTube has a bunch of stuff, so I’m watching those in odd moments.

And for your amusement, here’s the back-of-the-envelope sketch that will one day, if the moons align, be a proper fantasy map. And this, too, is not the whole world, by any means. It’s merely the western half of the southern hemisphere continent. But see that little island up above the squiggly line? That’s Callina, which is where all the northern hemisphere action happens. It probably won’t stay in that shape, since I have some logistical issues to resolve, but that is pretty much its location. 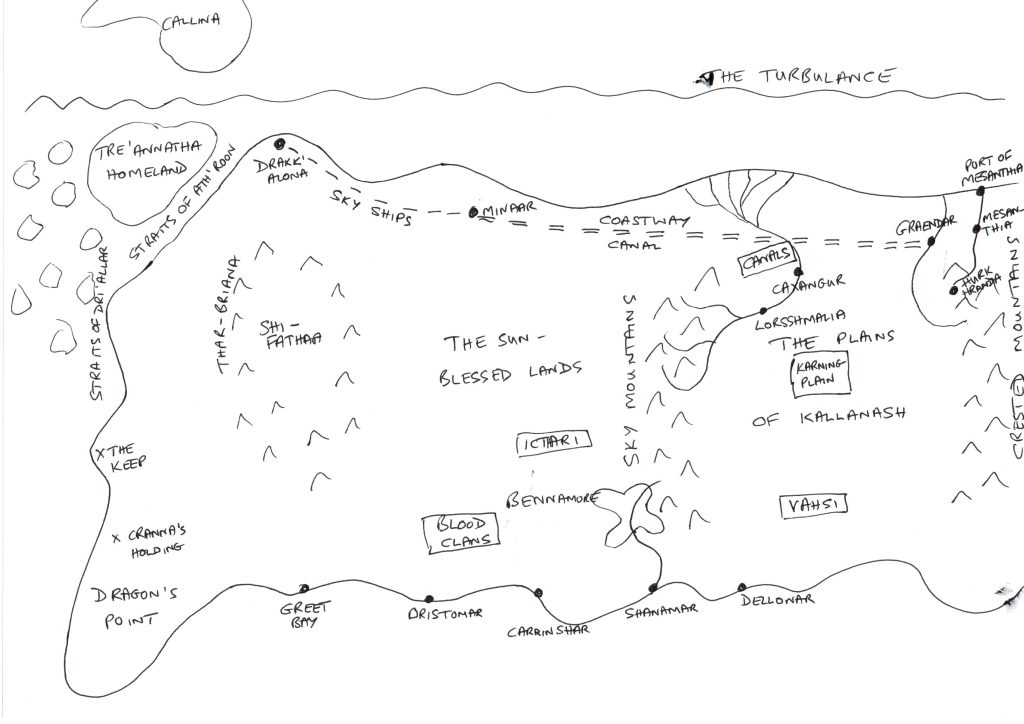