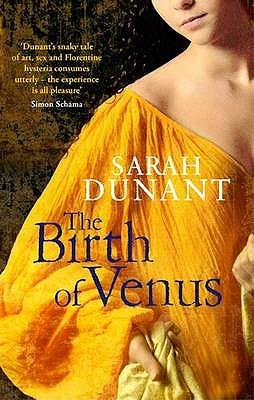 I loved this book. Right up until the very last chapter, I loved it. And then… if I hadn’t been reading on my Kindle, I’d have hurled the thing across the room. Ack. I can’t talk about the reasons for this without giving away spoilers, so if you don’t want to know anything, don’t read the second half of this review.

Here’s the premise: fourteen-year-old Alessandra is the oddball of her fifteenth century Florence family. She’s not beautiful, as her sister and two brothers are, she’s not content to follow the prescribed duty for a well-to-do woman and either marry and push out babies, or take herself to a nunnery, she’s been educated and she has artistic talent. Her drawing is a secret, abetted by her slave maid, Erila. She yearns for freedom, but is constrained by the need to remain virginal. But when her father employs a painter from the north to paint the family chapel, Alessandra is drawn to him, despite the prohibitions on both of them.

You would think, given all this, that the story would play out as a romance. Girl meets painter, girl is attracted to painter, painter is attracted to girl, insuperable obstacles… yada yada. And to some extent, it does. But the author has ambitions far beyond the simple romance; she wants to write Literature. So what we get instead is historical fiction with the romance pushed firmly down to the bottom of the priorities list.

And it almost works. The backdrop of Florence – the city itself, the art, the social culture – is beautifully and lovingly drawn, with an almost painterly richness of colour and texture. The political setting, with the fall of the powerful Medici family and the rise of a charismatic religious leader, is covered pretty well, although Alessandra’s situation means that she misses most of it, and has to depend on other characters to tell her what happened. This leads to long, slightly info-dumpy dialogues. And sometimes the plot contrivances to get her into place for some historic event were creaky, to put it mildly. However, the complications and swirls of political fortunes were well described, and I was never at a loss to understand what was going on.

The characters were, in some instances, interesting, but all too often their motivations were unclear or downright unbelievable. Alessandra’s brother, Tomaso, for instance, is a major influence on her life, and not for good. Much of what happens to her is because of his machinations, and it’s hard to see why he chooses to be so evil towards her. Sibling rivalry just isn’t a good reason for some of the things he does. Why does he hate her so much?

Both the mother, with her own chequered past, and the slave maid Erila, are actually much more interesting than Alessandra herself, who always seems to be the victim of other people’s needs and manipulations. Her husband, too, is a fascinating character. All of these are people who, unlike Alessandra, made their own decisions, their own lives and remained true to themselves (yes, even the slave, who seems to have had more freedom than her mistress). The painter would have been interesting if we had ever seen enough of him to judge, but he remains a shadowy figure for most of the book. I did, however, like the conceit of not naming him, so that readers can imagine their own favourite northern painter in the role.

And then we come to the ending, and here is where everything fell apart for me. However, the rest of the book was very enjoyable, so it merits four stars but with a hazard warning: this is NOT the book to read if you want a satisfying ending.

I had some logic issues all the way through (the brother’s hatred for his sister, the mother’s contradictory attitude of educating Alessandra while somehow hoping she will just conform to her allotted role), but the nunnery puts all that in the shade. When her marriage ends, Alessandra is left a wealthy widow. The world is open for her. She could, if she’d chosen to (and if the author had embraced the romantic theme), have gone to Rome to find her painter.

But no. Her mother says: “Our city is cruel to widows.” And, with no other justification, carts her off to a nunnery. Not just any nunnery, though; this one is incredibly liberal and relaxed, Alessandra learns (finally!) to paint, is charged with painting the chapel, is happy in her art, living amongst other women. Sisters doing it for themselves. Yay!

But wait. When Alessandra was fifteen, and the French army was about to march through Florence and all unattached women were hastily married off or whisked into nunneries, why was this wonderful place never mentioned? Why did her mother allow her to be married to a man three times her age, who was gay and in love with her brother, rather than tell her about this nunnery where she could be herself at last and not shoehorn herself into society’s expected role? What on earth was her mother thinking?

And then, the final insult. The painter returns. No longer shy and overwrought, but settled and wealthy. Happy ending ahoy, surely. He’ll carry Alessandra off to Rome, along with her daughter, now fortuitously revealed as the painter’s daughter, and they’ll all live happily ever after. {Cue violins}

But no, again. Alessandra decides she’s “made her peace with God”. Well, that might be what she says, but it’s not at all how she behaves. She sleeps with the painter (in the nunnery! Very liberal), and she tattoos herself from neck to crotch with the image of a snake, with the painter’s face on it, tongue extended. And once she’s waved goodbye to her lover and daughter, she’s prostrate with grief. These are not the actions of a woman at peace with God, and comfortable with her decision to give up the secular world.

She is so NOT comfortable with it, that she ultimately kills herself. Why? Why stay at all when the nunnery was so constraining, when she had lost everything she ever cared about or wanted? Even her art, a victory so painfully won. And after she kills herself, Erila is planning to go off to England to find the painter. What? Why doesn’t Alessandra do the same?

Here’s the big problem with Alessandra’s character. All the way through she is pushed into doing things she doesn’t want, or into not doing the things she does want. She hides her art. She does what she’s told. She conforms. She marries when she’s told to. She has a child because it’s what her husband wants and to cover up her fling with the painter. She goes to the nunnery when her mother suggests it. The only time she does anything for herself is with regard to the painter. Here, at last, she shows some spirit, some sense of independence, of knowing herself.

But when at the end she has the opportunity to seize her life and take control, a moment that would have rounded off the book beautifully and brought her arc to a triumphant end – she doesn’t. Far from taking control of her life, she does the exact opposite: turning her back on life altogether, figuratively by rejecting the painter and literally by killing herself.

Now I understand that the author was avoiding the happy ever after that would have dumped the book on the romance shelves. I get that. A literary historical story is what she wanted to write, and that’s entirely her choice. I suspect that she wrote the prologue first, and the premise of the nun of many years with a secret past ending her life by suicide is a fascinating one. Trouble is, the story that came after didn’t quite fit with that premise, and in the end it felt like the author struggled to create the character that would convincingly turn into that nun.

Alessandra never quite becomes either the suppressed conformist, or the open rebel. She pursues her art, but only in secret (and with the complicity of her mother). She sneaks out at night, but gets frightened and runs home. She wants to talk to the painter, but is petrified of being caught. She meekly marries, is given the freedom to pursue her art but, far from appreciating her luck, she still spits at her brother and husband, and seduces the painter under her husband’s roof. She bravely finds her way into church when women are excluded, yet hasn’t got the gumption to define her her own life when her husband leaves her a widow. She tries to follow the religious tenets of the day, while flouting them outrageously when it suits her. She’s neither one thing nor the other, merely a cipher swept along by a soapy plot.

And this is the root of the problem. The story is, at heart, a romance, a soap-opera of a life, the highlight of which is an instant attraction worthy of Mills and Boon. The arranged marriage, the fling with the painter, the child who could be the husband’s or the lover’s… these are almost cliches in the genre. Add in the dramatic return of the painter, who’s been searching for her for fifteen years, and the hot sex, and you have all the conventions of a perfectly standard historical romance. Cut out the prologue and the last chapter or so, and this is exactly what it would be. Thus the most obvious, most fitting ending would be the happy ever after with the painter.

All of these would have worked with the somewhat contradictory depiction of Alessandra’s character. But to make the eventual ending credible required a different trajectory, a different Alessandra, one who was gradually trodden into the dust, so that rising again or ever taking her life into her own hands was impossible. The best ending for any book is the one that is completely inevitable, given everything that has gone before. And in this case the ending, so far from being inevitable, was not convincing to me in the slightest. I find it impossible to believe that Alessandra, so aware, so intelligent, couldn’t see any other possibilities, especially given the free-spirited example of Erila right under her nose.

The theme of Alessandra’s life was freedom: her lack of it as a child, suffocated by the stultifying constraints of her society, and her need for it as an adult. In her life she was in fact offered a number of possible freedoms. The freedom of marriage. The freedom of wealth. The freedom of art. The freedom of love. And the freedom of religious life, the acceptance of God’s will. Alessandra rejects every one of these. And I can’t for the life of me understand why, except that the author had her ending all planned out and none of these fitted.

3 responses to “Historical fiction review: ‘The Birth of Venus’ by Sarah Dunant”