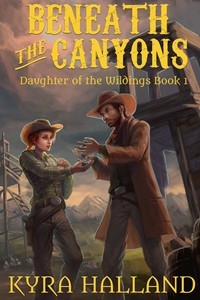 What could possibly improve a good old-fashioned western? Why, a little magic, that’s what. Yes, folks, what we have here is a western/fantasy mash-up, complete with horses tied up outside the saloon, gambling and whoring inside, and gunfights in the street, but some of the people wearing the big hats are mages, and the mining going on in the hills is digging up something a lot more powerful than gold. And is it fun? You betcha.

Silas is a mage visiting the Wildings from neighbouring Granadaia, a bounty hunter looking to round up a renegade mage for profit. Lainie is a rancher’s daughter with her own untrained magical powers. Silas ought to hand her over for training, or else remove her powers altogether, leaving her a shell of her former self, but somehow he can’t quite bring himself to do either. Meanwhile, the town is being torn apart by the mining for some valuable commodity which damages the ranchers’ land and produces terrible nightmares. What is going on?

Now, the mystery isn’t terribly complex and most of the characters fall into one of the standard categories: white hats, black hats or red shirts. No shades of grey here. But the two main characters are lovely, a solidly honourable and gentlemanly hero, and a spirited, independent but smart heroine. Lainie’s determination not to be docile does get her into trouble sometimes, and yes, she does have to be rescued by our stalwart hero once or twice, but she also uses her initiative and is just as instrumental as he is in saving the day. And the romance between them is wonderful, sweet rather than hot (although magic does create certain… erm, interesting effects).

There’s some fascinating world-building in the background, and I would have liked a little more detail about some of it, particularly the blueskins living in the hills, who have the power to understand any language spoken to them. There’s the politics of Granadaia, with its Mage Council, too, and I loved the idea that a person’s magic is rooted in the land they were born on. Fortunately, there’s a whole series in the pipeline, so I’m hopeful that more of this will be revealed.

What didn’t work so well for me? There were a huge number of miners who were almost uniformly stupid and selfish and greedy. And a lot of them got shot in the numerous gunfights. They were very expendible, and I wondered how many of them had wives and families back in town, and perhaps wouldn’t have been quite so cavalier about their own safety in reality. But perhaps that’s just me with my twenty-first century sensibilities. [ETA: Apparently they were all vagrants and drifters, a point that whizzed by me as I sped through.] Another minor grumble: I found the plot just a tad predictable at times. There were one or two twists, but not quite enough for my taste.

But these are trivial complaints. I really loved this book, and tore through it in no time. I loved the blend of magic with western conventions, I loved the politeness (Silas always addresses Lainie as ‘Miss Lainie’) and I loved the gentle romance. An entertaining read. A good four stars.

2 responses to “Fantasy Romance Review: ‘Beneath The Canyons’ by Kyra Halland”