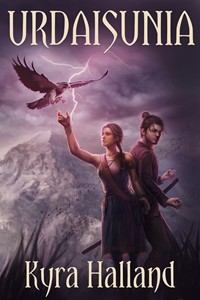 Kyra Halland is one of those rare authors capable of creating a deeply realistic fantasy world, with an equally realistic romance embedded within it. Too many fantasy authors tack the romance on as an afterthought, or else the romance is all-important and the fantasy elements are hurled randomly into the mix, as if it doesn’t matter whether the obstacles keeping our pair of lovers apart are meaningful or not.

Here everything is carefully thought out. Rashali is a simple village woman, struggling to survive in an Urdaisunia now conquered by neighbouring Sazars. Eruz is a Sazar prince, treading a careful path between his father the king, his vicious, squabbling brothers and his own conscience. When chance throws Rashali into his path, he is forced to face up to the consequences of his father’s rule. And then, delightfully, the gods take an interest in matters and start poking around in the affairs of men for their own not particularly altruistic reasons.

I’m not usually a big fan of having gods as active participants in a story, but here it works really well. It took me a while to overcome my resistance to miraculous events that just happen to carry the plot in the right direction. Here, of course, that’s the whole point, the gods are interfering and causing all sorts of things, good and bad, to afflict our heroine. Once I stopped worrying about the realism (or otherwise) of it, however, the story swept me up and carried me along beautifully, and I really enjoyed that aspect of the story. The gods are not at all as you’d expect, and their little squabbles and rivalries are great fun.

There is a little (non-god-related) magic in this world, and one rather clever communication contrivance that weaves into the plot very well. The world itself is a simple one, with just a few neighbouring societies: apart from the Urdai and Sazar, there are the Sangh, the Kai-Kalle and the Xaxan. Urdaisunia, the focus of conflict between these various countries, has two major rivers but (because of a quarrel in the god-world) they are on the brink of drying up, leading to major tensions. The political differences, particularly between the Urdai and the Sazars, form the backdrop to the whole story.

If I have a grumble, it’s that the characters tend to fall neatly into the good or bad side of the equation. The king, Eruz’s father, in particular, was a little too stupid for my taste. Even when Eruz brought evidence of his brothers’ treachery, the king made no effort to investigate, simply believing the brothers. His dislike of Eruz, who was an excellent army commander, seemed somewhat irrational. Kings really have to be better judges of character than that, if they’re to survive long in power. They also have to be pragmatic, and not allow their personal feelings to interfere with political decisions, although I suppose having a son and heir who constantly says, “Yes, but…” might get rather trying.

My only other complaint is that I found the names difficult. Eruz and his brothers, for instance, are Eruzasharbat, Hazramatanarg and Teshtarganazad, and all the rest of the family, army commanders and the like, have similar jaw-breakers. Fortunately they were often shortened. But that’s a minor point.

This is a refreshingly different fantasy, with writing that brings the world vividly to life (I swear I could feel the sand between my toes as Rashali walked through the desert) and a clever balance between the earthly world and the realm of the gods. A very enjoyable four stars.