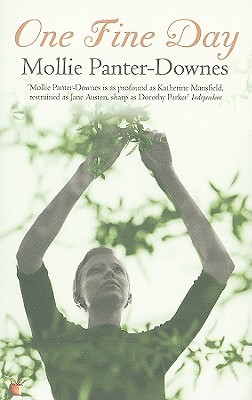 This is a book from another era, in every sense. Written in 1946, it shines a light on a different age, a brief moment of history, and quite a narrow aspect of history, at that. In the aftermath of the war, an upper-class couple in southeastern England adjusts to the reality of life without servants and wealth.

The main character, Laura, is the slightly dippy wife whose day we follow as she goes about her chores. No longer able to sit idly at home, or gad about the countryside visiting or walking, she shares the household chores with her sole remaining ‘help’, queues for food at the shops with other matrons, tries to arrange for a gardener and cycles off to retrieve a missing dog. Meanwhile, husband Stephen and daughter Victoria are going about their equally mundane lives. And if this sounds dull, indeed it is, as a story.

The point of the book, though, is not so much in what happens, but the constant running commentaries from inside the various characters’ heads. The author doesn’t hesitate to jump from head to head, as needed, in order to give the various viewpoints. And what they expound on is how dreadful life is since the war, with everything changing for the worse and life so terribly difficult. Really, this is nothing more than a glorified essay on the post-war realities of British life, mostly from the upper-class perspective, but sometimes pointing out that the working class and ambitious middle class have done very nicely, thank you. Social commentary, thinly disguised as fiction.

The greatest pleasure of the book is in the author’s descriptive powers, capturing the essence of the English countryside of the era and the attitudes of the people living there. For many people, the language alone would make this a captivating read. For me this wasn’t enough. I loved the glimpse into the past, but the characters were too stereotypical to be compelling, and the lack of plot or clear resolution too great a hurdle to overcome. Three stars.