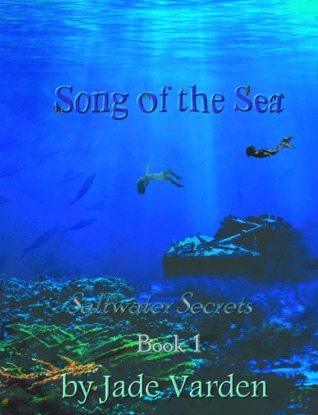 This book is way outside my usual sphere – YA, not-quite-human creatures, some romantic difficulties – but the opening is charming, and I ended up enjoying it a lot.

Here’s the premise: Brenna is a high school student with a best friend, an almost-boyfriend, a fisherman father and a mother who likes to stand looking wistfully out to sea for hours on end. When Brenna discovers something unusual in the attic… at this point, I knew exactly what was going to happen. And when it does, and Brenna decides to head for the high seas alone in a small boat, frankly I wanted to sit her down and tell her just what a stupid thing she’s doing. But – teenager. There’s no reasoning with them, so I can accept this as part of her character.

Out on the oceans, Brenna runs into the inevitable difficulties, plus a rather nice young man called Dylan, and the two team up on Brenna’s big adventure. Their journey is quite episodic, with every stage fraught with some kind of peril from marauding sea creatures or the ocean itself. Each time, there seems to be a convenient island for them to recover on, before setting off for the next encounter.

On the whole, this works fine. But there’s a section of the book which completely lost me. After deciding they can’t get where they want to go by sea (too dangerous), our plucky heroes set out to make the journey across land. Along the way, they travel through three different countries, with two non-English languages, two non-dollar currencies and a whole continent of cultural differences. Oh, yes, and they start this mammoth journey having lost all their worldly goods. Like passports. This would be enough to tax the skills of even an experienced adult traveller, but a couple of teenagers? Plus the route they take is bizarre, to put it mildly. So I was flummoxed by this part of the book.

Where the book really scores is in the underwater sequences, which are superb, beautifully described and so evocative I could feel the ocean currents against my skin. Dylan’s increasing discomfort as they journey by land, away from his beloved ocean, is also well described, and (for me, at least) was far more effective than the occasional scary monster popping out from behind a rock.

The final encounter is unexpected in several ways, and rather mature for a book otherwise aimed squarely at a young teenage market. In fact, the actions of one character, quite frankly, gave me the chills. I absolutely did not see that coming. And the ending, too, is very grown-up. Kudos to the author for avoiding the obvious ways of wrapping things up. The final moments not only bring this book to an elegant close, but also neatly lay the groundwork for the continuation. Very well done. The unbelievable (to me) land journey keeps this to three stars, but for anyone who’s less pernickety than me (which is almost everyone), this is a readable, entertaining book with some great descriptions of the ocean and a thought-provoking ending.