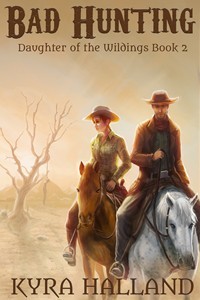 This is the second book in the ‘Daughter of the Wildings’ series, and I loved the first, ‘Beneath The Canyons’, when I read it last year. What do you know, this one is even better. Part of the fun is the genre mash-up – if you’ve ever wondered what a western would look like if you threw wizards and magic into the mix, wonder no longer. This has all the traditional elements of a western – desert badlands, saloons with swinging doors, gun-slinging bad guys, dust storms, horses and big hats. But it also has two or three different kinds of magic, some strange blue-skinned creatures who are probably not human and a whole heap of conflict between the different magic users.

The world-building is a strength of the series, and although each story seems to be no more than a simple adventure, each book pulls back the curtain a little to reveal more of the politics going on behind the scenes. There are enough factions and hidden agendas to fuel a far more epic work, but the author weaves the detail seamlessly into these rattling good yarns so it never feels heavy.

The two main characters, Silas and Lainie, have a wonderful old-fashioned charm about them. Silas is a gentleman who worries about Lainie and wants to protect her, while also respecting her. I loved that he was constantly thinking about her welfare, and worrying whether he was doing the right thing. Lainie is a perfectly capable woman with her own magic, but the author resists the temptation to turn her into a kick-ass warrior-babe. Instead, she only intervenes when absolutely necessary. And both of them take their turns at being rescued from disaster, or, sometimes, rescuing themselves.

The plot – well, there’s not much to it. Silas is summoned to help out a fellow mage, only to find him dead, along with a third mage. Then the hunt is on to find the killer and deal with him before Silas ends up as the next one to die. Along the way, Silas and Lainie work out a few wrinkles in their still-new marriage. But really, the pleasure of this series is the wonderful western-with-magic setting. My only complaint – it’s very short, only 120-odd pages, and the last 10% of the book is a teaser chapter of book 3 and other advertising.

For anyone starting with this book, there’s enough backstory dribbled out along the way to explain everything, but I recommend you start from the beginning for maximum enjoyment. This is one of the most entertaining fantasy series around, and I loved every moment of it. I wouldn’t normally hand out five stars for something this light and easy-to-read, but dammit, it was just so much fun! Five dusty, bullet-riddled stars.