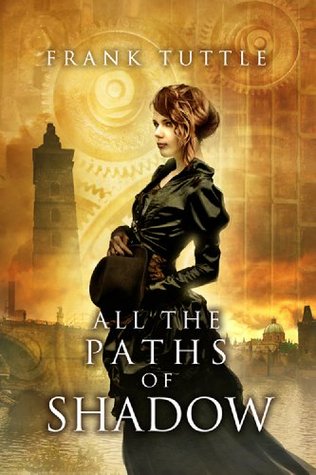 This is one of those books that ticks all the right boxes for me. Spunky female lead – check. Detailed world building – check. Interesting magic system – check. Humour – check. A bit of a romance – check. Talking plant – check. Wait, what? A talking plant? OK, whatever. And yet, somehow… it doesn’t quite work.

The premise is a good one. The kingdom’s first female royal sorcerer (called a thaumaturge here) is given an unusual challenge by the king: ensure that his speech to the coming Accords (a sort of international summit meeting) is not shadowed by the massive bulk of the centuries-old tower looming nearby. It’s a bit of a tricky one: can Meralda either move the tower (no) or move the sun (no again) or bend light to shift the shadow (possibly…). She sets to work with her calculations and research to come up with a way in the impossibly short time she has.

And here’s the first problem. Why is there only one royal thaumaturge? Why can’t the king call upon the combined skills of all his kingdom’s thaumaturges? Because it wouldn’t be nearly so interesting a story if he could, that’s why. So already I’m seeing contrivance at work.

The world-building is hugely detailed. As Meralda walks through the capital in the opening chapter, every street and shop and type of transportation and occupation is name-checked in an endless stream of trivia that a) I’ll never, ever remember, and b) probably won’t even need. This smacks of an author trying too hard, or possibly just showing off. Look at me! I know all the shops at every intersection! It’s all a little too over-the-top for my taste, but it would win every world-building contest hands down.

And another niggle. The out-of-the-blue foreigners who seem so mysterious and alien when they first arrive, turn out to be very familiar indeed. In fact, they place this otherwise interesting setting right here on mother earth, and frankly that’s far less appealing to me than a fully realised secondary world. Bah humbug.

The magic system is another aspect that ought to appeal to me, but in reality falls a bit flat. I loved the idea of working out the principles of a spell mathematically first, then setting it up in situ (a process known as ‘latching’) and only releasing it later, as needed. There’s so much potential to that, and I really enjoyed how it was used. Unfortunately, when things get tricky towards the end, all pretence at a rational magic system is thrown away, and a variety of magical objects are dredged up out of nowhere to provide a solution. At times, it seemed that Meralda had only to walk down her laboratory to find another device which was just what was needed. Gah. Can we say deus ex machina?

So what did work well? The talking plant, believe it or not. Mug was both cute and smart at the same time, providing most of the humour and a lot of the common sense. For instance, the love interest is handsome and charming, and Meralda trusts him implicitly from the start. Mug’s the one who voiced the note of caution that the oh-so-intelligent Meralda was too weak at the knees swooning over her new love to think of. And the tower was completely awesome, right from the start, when it’s just a creepy tower, and later, as all its little secrets are gradually revealed. I do love a magical building.

This sounds like a fairly critical evaluation, but actually this is pretty good book. My issues are nitpicky, rather than substantive, and the plot rolls along merrily to its dramatic climax. It’s not mind-blowingly awesome stuff, the author tries too hard and crams in too many melodramatic and humorous touches, and there are way too many moments that are perilously close to deus ex machina. But it’s funny and readable and I can recommend it to anyone less picky than me (which is almost everyone). Three stars, and a merit award for the talking plant (I adore sentient greenery – there should be far more of it in fantasy).