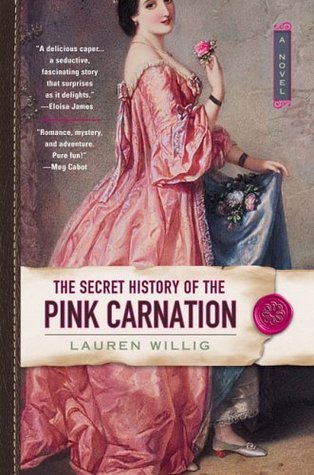 This was recommended by a friend when I lamented the difficulty of finding decent Regency romances these days that have some modicum of connection to the actual era, and don’t play fast and loose with historical details. And it’s true enough that the historical details do feel very realistic. The author has obviously done her research.

Unfortunately, while the settings are very credible, the characters simply aren’t. Now, this is partly my problem: I just find it very hard to read about Regency ladies clambering in and out of windows at night, and having almost-sexy-times with rakish blokes in masks and otherwise behaving recklessly, without comparing them with Jane Austen’s much more sedate heroines. Or even Georgette Heyer’s, whose characters were always spirited, but never, ever silly. So your mileage may vary, but for me I had trouble believing any of this.

The premise: in an era of Englishmen secretly spying and otherwise interfering with the plans of dastardly French leader Bonaparte, a young lady sets off for France determined to help out. And in the present day, a university researcher follows the story through the young lady’s journals. Now, I’ll be honest, the framing device of the present day researcher felt too contrived for words. It was also very jarring when the story was flowing along nicely, to be forced to stop and try to remember the modern-day characters and the paper-thin plot developments. So I could have done without that part altogether.

The Regency elements were much better, but again, credibility was stretched. Is it possible to get to know a man, and yet not recognise him when he turns up in an unexpected place – and wearing a mask! Surely when he talks, the voice would be recognisable? But no, apparently not, for heroine Amy is completely fooled. But then Amy must be one of the silliest heroines ever. I’m all in favour of spirited heroines who don’t meekly submit to the whims of fate, men and their mothers, but going out to meet a total stranger, alone, in the middle of the night, is just out and out stupid. Time after time she does things that, in real life, would have got her killed or raped or (at best) would destroy her reputation, but somehow, miraculously, she survives unscathed (a man rescues her from her own stupidity, usually).

Now, I kind of get the tone the author was going for – with humour to remove any element of real risk. And it’s true that there are some very funny, laugh out loud moments. Even so, as Amy’s capers became ever more ludicrous, my suspension of disbelief was tested to the limits. And that scene in the boat on the Seine? That was where it broke altogether.

If you can set aside all memory of more realistic Regency fiction, and just go with the flow, you might well enjoy this. I never found any of it believable, however, so for me it only rates as two stars.