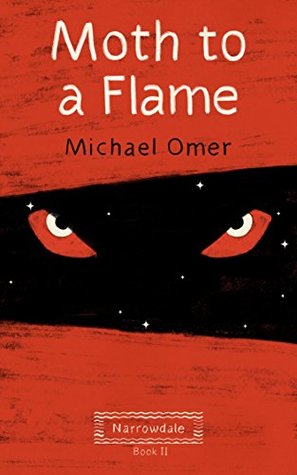 This is the second book in the Narrowdale YA series. I’m not sure exactly which genre it falls under; I’d put it somewhere between suspense and horror, with paranormal elements. And as YA goes, it’s at the younger end, and wouldn’t be unsuitable for middle-graders, since the horror is muted, and the humour is cranked all the way up to eleven.

In fact, the opening few chapters are as funny as anything I’ve ever read anywhere, and yes, that covers Terry Pratchett, Douglas Adams and Bill Bryson. Main character Amy is an absolute delight, completely swept up in her own affairs, and since the book is written in the first person, we get to share all her dippy thoughts. The collision of Amy with algebra had me crying from laughing so hard. I know humour is a personal thing, but I defy anyone not to laugh out loud reading this.
The first book in the series, ‘Sleepless’, described how fourteen-year-old Amy moved to Narrowdale with her parents, made a couple of friends, and got involved in some scary stuff. That book had a few wobbly aspects, but this one works far, far better. The characters are shown in sharper focus, the plot feels more real and the writing is beautifully smooth. And I may have mentioned the humour…

Apart from Amy, the backup team comprises Shane, the pal with the camera, Carole, the obsessive academic, and Nicole, the friend from back home who bounces in and out to jog things along. There’s also Peter, the security guy that Amy rather fancies. And now there’s Chris, Amy’s potential boyfriend (I rather like Chris, so I hope he sticks around). Even the minor characters are quite memorable, especially Carole’s mum, with her insistence on family meals together, no matter what. We all know someone like that.

The plot… well, if you’ve read the first book, you’ll know what to expect. There’s a weird murder, and a guy who’s disappeared, and Amy, as usual, is right in the thick of things, walking into murder scenes and wandering about in all sorts of odd places, finding… well, all sorts of odd things. And, as usual, the adults pat her on the head and tell her not to interfere, to leave it all to them. And does Amy listen? Of course not! That would be no fun at all.

There are a couple of very minor things to mention on the negative side. One is the use of present tense. Now this is a very personal thing, it’s very common in YA and most people probably won’t even notice, but I found myself constantly jolted by it. So that spoiled my enjoyment very slightly. The other is that this does feel very young, to me. Again, it’s a purely personal thing, and I know I’m not in the target audience for a book like this. I don’t read a lot of YA, and when I do, it tends not to be the modern-day, high school kid type of YA. I find it much easier to read when it’s (say) epic fantasy. For me, reading about Amy’s fourteen-year-old thoughts felt uncomfortably voyeuristic. Which means, of course, that the author got it exactly right, so it will be perfect for the appropriate audience. And it’s a testament to the author that he kept me hooked, even when the kids-running-rings-round-the-police element reminded me of my misbegotten childhood reading Enid Blyton’s Famous Five.

There’s one more thing that the author got exactly right, and this was a huge plus for me: he’s beginning to reveal a little more background on Narrowdale itself, and the reasons behind all the weird stuff. Now, I’m a sucker for this kind of thing. I hate it when things happen just because, and I love that frisson of excitement you get when you discover something huge about the world the story is set in. It’s why I read epic fantasy, after all, and to find it here is awesome. That alone would keep me reading, but adding in the humour, Amy’s charm and the beginning-to-be-interesting friends makes this series unmissable. Very enjoyable, with a great ending, and just a couple of personal niggles keeping it to four stars.