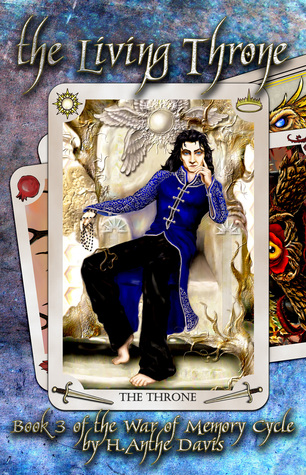 This is the third book in the War of Memory series. I’ve already raved at extended length about the awesomeness of these books, so I won’t repeat all that. Suffice it say that if you like your epic fantasy with industrial-strength world-building, compelling characters, a plot that stretches itself over a whole continent and a vivid writing style with just a hint of horror, you should give this a try. Start with The Light of Kerrindryr.

So how does this book stack up against the first two? Surely by now the tale must be hitting mid-series sag and getting bogged down in plot sprawl or weighed down with its own history? It’s true that there are two large books’ worth of the story so far, and a huge array of characters to keep up with. I’ve said before that this is a series that would justify its own wiki, and it would have been useful to be able to look things up from time to time. However, there is a list of characters and a glossary at the back of the book, so that helped.

Fortunately, the author cleverly manages to revise the previous events while still moving things forward. There were a few moments when I couldn’t quite remember the fine detail of some earlier plot point, but only once where I just couldn’t remember anything at all about a character and his previous interactions with our heroes. So although it worried me going in that I wouldn’t be able to remember anything, it really wasn’t too much of a problem.

However, the breadth and depth of the world-building means that there’s an enormous amount of background information: about the world itself, the various flora, fauna and races, the history, geography and ecology of the continent. In the first two books, almost all of this stayed in the background, dribbled out in tiny amounts as and when needed. In this book, there were several places where the action stopped so that the main character (Cob) could be informed of some important piece of history. For the first time, I wondered if the sheer weight of backstory would topple over and squash the plot. And the device of having the Guardians withhold information, just because? That’s really got old. Cob gets mad with them for it, and so do I.

So let’s talk about Cob. He’s the archetypal teenage boy thrust into a position of power, but unlike many such stories, Cob doesn’t really grow into his powers and become a wise and just leader. He gets mad at everyone, even his closest allies, and lashes out when he shouldn’t. And he makes mistakes. This makes him human, and therefore very believable. There has been progress in the growing-up department, but he’s still a long way from wise and just leaderdom. Which is good, because that would be dull.

Of the (many) other main characters, some of them are likeable and some are intriguing and all of them are multi-faceted and compelling. There were one or two that I guess were necessary for plot reasons, but I didn’t find them desperately interesting (Weshker, for instance, or Geraad). Even so, I never got to (say) a Weshker section, and thought ‘Oh, no! Not him again’ as I did for some Game of Thrones characters (Catelyn, I’m looking at you here). And even if I had, one Enkhaelen, complex to the nth degree, would compensate for twenty Weshkers.

The plot in this installment is flimsily constructed around one of those zero-chance-of-success missions, where you know everything is going to go wrong along the way, in spades. And it does, of course, but the ways in which it went wrong still took me by surprise, with plenty of dramatic encounters, some tense episodes amongst Cob’s pals, and a few heart-wrenching moments. And there are revelations along the way that blew my socks off. I thought we’d pretty much got to the root of the main characters, but nope, not even close.

And then the ending. This is epic fantasy in every sense of the word, so the ending was suitably epic as well, with starring roles for every one of the (many) point of view characters. This did mean that the dramatic denouement went on and on and on, with three steps forward and two back. I’m not a huge fan of this kind of grandiose action, but for those who are, this is a perfectly executed example. And, just when you think it’s all over, the setup for the next book in the sequence, and what a setup it is! Awesome.

Another excellent book in the series. Beautifully constructed and written, with a complex plot and compelling characters, emotional depth, and some jaw-dropping revelations – five stars.