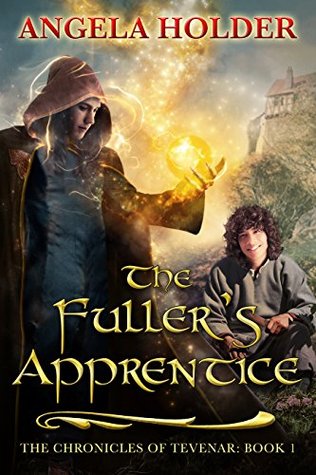 I absolutely loved the author’s previous book, ‘White Blood’, so naturally I couldn’t resist this one. Unlike the previous one, it’s the first part of a trilogy, but there are similarities, too, in particular, an interesting magic system, closely allied to the religion of the country. Wizards can only use magic in association with an animal familiar, and only in certain limited ways: for healing, for making legal judgements by examining actual events of the past, and to move things (or prevent them moving). These are interesting restrictions, and, as with all fantasy, part of the enjoyment is seeing the multitude of different ways even a limited application of magic can be used.

The two main characters are Josiah, the titular fuller’s apprentice, a young man of reckless impulsiveness, and the rather serious journeyman wizard, Elkan. The two meet when Josiah is amusing himself by running backwards and forwards through the fulling machinery (a scene that reminded me somewhat of the chompers scene in Galaxy Quest!). When things go wrong, Josiah is saved by the quick-thinking wizard, who then offers him a job as his assistant when the Master Fuller wants to fire Josiah.

The two of them, together with Elkan’s familiar, Sar (a donkey), begin a slow amble through the scenery which goes on for chapter after chapter. There’s a great deal of detail here about how the magical healing process works, how the legal system works, and also the wizard’s role as a kind of priest (he officiates at a marriage at one point). We even get a description of waulking (a precursor to fulling as a way of preparing woven materials). This is not uninteresting, but it’s very, very slow, and action moments are few and far between. It’s very tempting for an author who’s worked out all the subtleties of her invented world to the umpteenth degree to squeeze all of it into the story, but it does make the pace glacial. The problem is compounded by dialogue of greetings, detailed explanations of medical conditions, and so forth, which could easily have been condensed or skipped altogether.

Apart from the magic, the world-building is nothing earth-shattering. The population is largely agricultural, with all adults assigned to craft guilds, and trained in one or other craft, even if, in practice, they might be doing a variety of other tasks. This leads rather interestingly to the idea that children are named for their parents’ craft and their own, rather than taking a family name. Thus, Elkan is known as Elkan Farmerkin Wizard. Machinery is limited to simple mechanical devices (like the fulling mill), sailing ships, and the like.

The plot – well, there really isn’t much of a plot. Elkan and Josiah move about healing, judging and conducting religious ceremonies. There’s a sub-plot with bandits, who wander into the story from time to time causing trouble, but mainly the focus is on a variety of challenges for Elkan and his companion-in-magic, Sar the donkey. This makes the story very choppy and episodic. Every few chapters, there’s a new town or village, a new medical condition described in disconcertingly modern terms, followed by a cure, or a long discussion about why it can’t be done.

Of the characters, the conflicted and quite complex Elkan is the most interesting. At first he seems rather dull, happy in his work and disapproving of Josiah’s impulsiveness. But later, as we learn more about him, he becomes a little more nuanced. Josiah does some pretty stupid things, but he does learn to see things in less black and white terms. I’d have liked to know more about Sar the donkey, but perhaps that will come in future books. The other characters are mostly too numerous to be more than hastily-drawn sketches. Some effort is made to give the bandits some depth, but ultimately all these minor characters are either good guys or bad guys. The only character whose behaviour stretched my credulity was Meira. Her actions felt like plot-drivers, rather than something which would arise naturally. But it was a minor point.

But as the book goes on, the happy healer and fixer aspect is increasingly mired in difficult choices, and this is where the book really shines. It’s impossible not to share the grief when people die, despite the wizard’s best endeavours. How do you explain to simple folk that some things just can’t be fixed, even with magic? And when there’s a disaster, with many people needing help, how do you choose? And is it possible to give so much yet ask for nothing in return, not even personal happiness? All these questions and more are addressed by the end of the book, as well as the important one: the issue of free will. And although the characters don’t seem to be anything out of the ordinary, they still got under my skin so that I cared very much what happened to them.

The ending gave me a complete side-swipe. That was really NOT how I saw this going. But it all followed completely logically from the developments up to that point – one of those oh-of-course moments, not wait-what? And then everything is nicely set up for book 2.

A very readable book, well written and nicely thought out. It was terribly slow moving, and I often found myself muttering: yes, yes, but get on with it. Even so, I found myself thinking about aspects of the story while I was doing other things, and always picked it up again with pleasure. That’s the sign of a good book. I shall certainly be watching out for the next in the series. Recommended for the characters, the setting and the interesting magic system, rather than action. Four stars.

One response to “Fantasy review: ‘The Fuller’s Apprentice’ by Angela Holder”