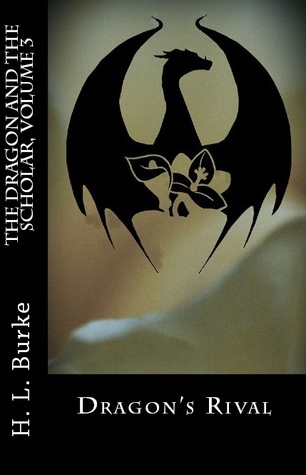 This is the third in the series The Dragon and the Scholar, and the story is blossoming now. It’s focused more on the personal elements than the background plot, but I found this more interesting anyway. The on-again off-again sort-of romance between dragon-prince Ewan and scholar Shannon has reached a critical point, and Ewan’s rival Ryan, another prince, is there waiting for Shannon when things fall apart. Everything depends on Ewan: will he admit his love for Shannon or deny it all to give her a chance of happiness with Ryan?

I’m not generally a big fan of characters who say and do things to protect another character ‘for their own good’. It’s presumptuous and disrespectful not to allow them to make their own decision. But in this case, Ewan has been enchanted (or cursed, perhaps) by an evil sorceress, now dead, to take the form of a dragon permanently. If Shannon chooses to be with Ewan, she gives up all possibility of a sexual relationship and children. There’s also the problem that dragons live longer lives than humans. That’s a heavy price to pay, and Ewan’s actions to push her towards Ryan are very understandable in that context. The tragedy of Ewan’s situation adds a darker shade to an otherwise rather lighthearted story.

The background plot is nothing wildly original, just the usual conspiracy to take over the kingdom. One of the weaknesses of this series, to my mind, is that the characters fall too neatly into the good guy/bad guy boxes. I really like a hero with foibles, or a villain who has some redeeming qualities. That’s how people are in real life, and it makes the story so much more realistic if the characters aren’t simple black or white, but have at least some hint of grey about them. But that’s a personal preference, not a major criticism.

Fortunately, the background shenanigans never come close to overwhelming the story, which focuses firmly on the two principle characters and their troubled romance. A reader would have to have a heart of stone not to root for these two likable characters to get back together, and the author elegantly contrives to ensure that Ryan isn’t left too broken-hearted, either. Very nicely done. Four stars.