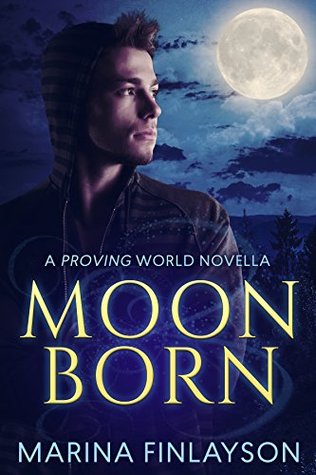 Ah, Garth… my favourite werewolf. {Sigh} He was a side character in The Proving trilogy, although an important one, but here he gets to take centre stage. This is a terrific prequel to the series. A few familiar characters pop up from the later story, but it’s not necessary to have read the trilogy first. In fact, it would work very well to read this and then move straight into Twiceborn. Either way works.

This tells the story of how Garth became a werewolf and how he got on in his early years as a shifter (not very well, in case you were wondering). Poor Garth! You’d have to have a heart of stone not to feel sorry for the poor guy, with all his difficulties. Because the trouble is, Garth doesn’t take easily to pack life and for a werewolf, that’s a real problem. Watching Garth struggle to fit in with a pack, or to live alone, and yet fail at both, is heart-rending.

But it’s not all grief and misery. There are some awesome moments in here, too. Garth’s first full moon transformation, followed by his first hunt as a wolf, is riveting. In fact, all the wolf moments are brilliantly written. It’s not easy to convey the almost completely animal nature of a werewolf in wolf form, where even the names of the other pack members are lost, but Finlayson is terrific at getting the reader right under the wolf’s skin.

The story covers quite a lot of ground, fifteen years to be exact, taking Garth from pre-werewolf days right through to the time of the dragon queen wars, the Proving, so it’s episodic rather than a single story. It’s no less compelling for all that, and the dramatic finale is an emotional roller-coaster as each minor triumph is immediately followed by a lurch downhill towards disaster. This is a great read — highly recommended. Five stars.