I first read this in December 2011, when I was only just discovering self-published books, and finding most of them to be a bit ho-hum. Back in those early days of the Kindle, a lot of previously unpublished authors were dusting off long-abandoned manuscripts, kept in a drawer for years, maybe, and tossing them up on Amazon without much thought. The quality was variable, to put it mildly. There was a huge amount of dross, as is inevitable in a system with no quality control whatsoever, a lot that could have been better with a bit of polishing, and a few that just blew me away. This was the first I came across that made me say: wow, that was amazing! I’ve since gone on to read many more of the author’s works, and I highly recommend her for excellent reading that will shatter all your preconceived ideas of fantasy. 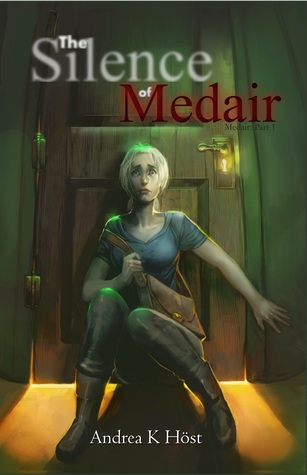 For those who say all self-published works are dross – this book is a stunning counter example. The manuscript spent an unbelievable ten years – I’ll say that again, TEN years! – languishing with a single publisher before the author withdrew it in disgust and self-published. You can see why they might have had a problem with it, because it’s very different from the average. It’s intelligent, thought-provoking and well written. It avoids cliches. It’s character-driven fantasy at its best. It’s also a cracking story. I loved it.

The opening is, surely, how all fantasy novels should begin: not by parachuting the reader into the middle of a battle, or some gruesome moment intended purely to shock, but quietly, with the main character in her setting, then adding in the mysterious background, some magic and a threat, to draw you in. But then this is an unusual book in a number of different ways. Many of the events which other writers would turn into a whole trilogy – a massive magic-induced disaster, an empire threatened by invasion, an escalating, seemingly unwinnable, war, a desperate race to find a magic gizmo to turn the tide, and then, miraculously, actually finding said gizmo – all happened five hundred years in the past, and are revealed only briefly in passing. The author even resists the temptation to put them into a prologue. Instead, the story starts some months after the primary character, Medair, has returned with the gizmo, only to find that centuries have passed, the invaders have become the establishment and she herself is the outsider. Her sense of dislocation, and how she adjusts to the new regime, form the substance of the book.

The created world is not outrageously original, just the standard-issue pseudo-medieval arrangement, with a few little touches to make it different, and happily no hackneyed taverns, assassins, thieves, whores and the like, and no gratuitous violence or sex. So this is a relatively civilised and orderly world, where the complications are political rather than societal. And unlike many low-technology worlds, there’s a relaxed gender-neutrality in operation. Women can, and do, become soldiers, heralds, mages, whatever they have an aptitude for. They can inherit empires, too. I get tired of the patriarchy thoughtlessly assumed in most fantasy.

And there’s magic, of course. Oodles of magic. There are mages and adepts (which may be the same thing, I’m not clear about that) who have quite powerful abilities, and there are also magical artifacts. There is also ‘wild magic’, which is hugely, earth-shatteringly powerful (literally) and very unpredictable. I liked the way that magic can be sensed in some physical way, some kind of feeling that allows a character attuned to it to know that magic is being used, and sometimes what kind, and where, and how powerful it is. That was neat.

But it has to be said that sometimes the magic borders on being deus ex machina. The heroine gets into a tricky situation and has only to reach into her dimensionally flexible satchel and pull out some magic gizmo or other to effect her escape. Or else another character waves his or her hands around and – pow, she is magically constrained to do something or other. Is it really deus ex machina if we know ahead of time that the satchel contains magical gizmos, or that the character is a mage? Not sure, but it certainly made a very convenient plot device. On the other hand, it allowed the heroine to use her own self-reliance and not be dependent on a bloke turning up with a sword or a spell to rescue her. In fact, she was usually the one rescuing the blokes.

The heart of the book is the nature of the Ibisians, the invaders of five hundred years earlier, now the establishment. Medair’s hatred and mistrust of them is still fresh, and the scenes between them crackle with tension, as she tries to adjust her strong and perhaps legitimate feelings to this new world order. The issue is complicated, too, by the other countries and factions still fighting against the new rulers. Where exactly do her loyalties lie? She has the magic gizmo which will destroy the invaders, but are these people still her enemies five centuries later? These themes – of loyalty and oppression and enforced compliance and the nature of colonialism – weave throughout the story.

This part of the book is beautifully done. The subtle and not so subtle differences between the world Medair remembers and the current one are neatly drawn – the architecture, clothing, food, mannerisms and customs – so that we first see the invaders through Medair’s eyes as strangely alien beings, and only gradually begin to soften towards them as we get to know them better. It becomes apparent that five hundred years of assimilation has worked both ways, and these Ibisians are not the same as the enemy of Medair’s own time.

The plot revolves around Medair’s struggles with her own antipathies and growing respect for the Ibisians, so there is a great deal of introspection and (it has to be said) downright angsting going on. There were a few moments when I wished she would stop agonising and just get on with it. But fortunately there was enough action interspersed with the angst to keep things rattling along. There were a few places where I wasn’t too sure what was going on, where a little more explanation or description would have helped. Occasionally the complex hierarchy of the Ibisians caught me out (all the ranks begin with a ‘k’, so they begin to blur together), and sometimes I wasn’t even sure which character Medair was talking to. But these are minor issues, which never seriously affected my enjoyment. This is a great read, a story with an intriguing premise, unexpected twists and plenty of action. It’s also that rare beast, a fantasy novel with a truly strong female lead character who’s not remotely a stereotype. I recommend it. Four stars.