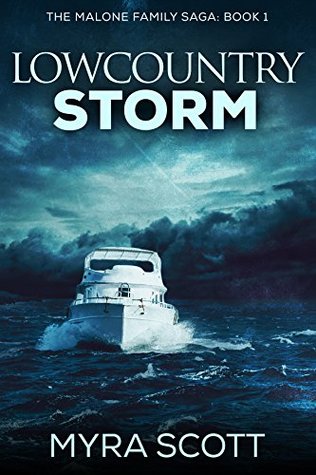 This is the first in a new series, The Malone Family Saga. These are thrillers with a strong romance component, with some raunchy scenes along the way. Sarah Elliott is an insurance claims investigator, specialising in chasing down possibly fraudulent claims by wealthy rich men. When Charleston socialite Redmond Malone files a claim for a missing two-million-dollar yacht, Sarah sets her sights on uncovering the scam and earning enough of a bounty to set her up for life. But — wouldn’t you just know it — Redmond turns out to be handsome and cute and so, so hot.

Well, yes, we can see where this is going, but that doesn’t make the tale any less fun. I really enjoyed the way the romance developed between these two. It progressed slowly enough to be very believable, and I especially enjoyed the storm scene, which was quite awesomely memorable in a number of different ways.

The thriller part worked OK too. I’m not normally a big fan of high-drama thrillers, which tend to stretch credulity beyond the snapping point, as a rule, but this worked very well. I loved Sarah’s common sense under pressure, with all her actions being perfectly logical. She made a very sympathetic and understandable heroine, and Redmond was a likable hero.

There were a few sections that felt a little clunky, as the author was working to set up the family background for the later parts of the series, but that’s a minor quibble. A good debut. Four stars.