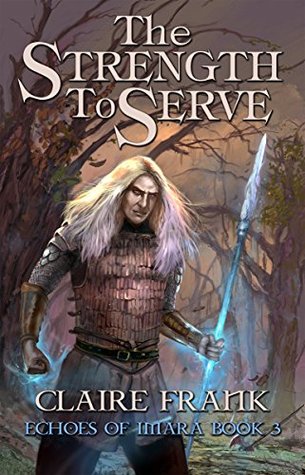 This is the third part of the Echoes of Imara series, which started with To Whatever End and An Altered Fate. It’s truly epic fantasy, with an array of characters pursuing their own agendas and plenty of world-threatening events in prospect. Our ‘heroes’, husband and wife Daro and Cecily and their friends are still dealing with the aftermath of the altered wielders (magic users). Pathius, the son of the former king, is in Imara while the Imarans help him to recover some stability. Meanwhile, the Lyceum loses a valuable artifact and asks Cecily to recover it. And across the sea in Attalon, Isley is imprisoned by the Emperor, as he plans an invasion.

One of the highlights of the second book was Daro’s stay in Imara, and this time it’s Pathius learning about the Imaran ways. The Imarans have a wonderfully ‘other’ feel to them, and everything about them and their land is strange, exotic and beautiful. There is a depth of characterisation in this section that really appealed to me, as Pathius and Ara inch towards an understanding.

Pathius is such a complex character. He’s the son of the king deposed (that is, killed) by Daro and his pals in an uprising that took place before the start of the first book. Pathius was believed to be dead too, and his reappearance is hugely awkward for the new king, Rogan, and everyone else. In book 2, he was dabbling in an uprising against Rogan, but that was defeated and in this book he has to decide whether he will continue to pursue a course as rightful heir to the throne or become a loyal subject of Rogan. He’s conflicted by his own history, and also by Cecily, with whom he shares a small part of the Imaran bond between Daro and Cecily. The book’s title, The Strength To Serve, gives a clue to which way it will go, even though the other characters are still suspicious of him. I very much want Pathius to be one of the ‘good guys’ but it’s obvious that he carries around a lot of baggage and could easily go to the bad at any time.

Daro and Cecily and their pals are (I presume) the people we’re supposed to be rooting for. I’ve always had a huge problem with that, hence the quotes round the ‘heroes’ up above. These are people who treasonably bumped off the previous king, and yes, he sounds like a pretty unpleasant guy but still — king! And here they are again in this book, behaving in very questionable ways. Callum, Daro and Cecily all do things towards the end of the book that have me questioning both their judgement and their ethics. The actions of Callum and Cecily I can just about accept as being necessary for the greater good, but Daro’s actions were completely beyond the pale, risking huge numbers of lives for a personal vendetta. I’m comfortable with grey morality, but to me this was not the action of a hero.

This is ironic, because earlier in the book, there’s an event which paints him very different colours, as a man undertaking a very difficult and dangerous task for the good of his people. His battle in Thaya is a great action set-piece, Daro at his masterful best. In fact, all the action scenes are superbly done, and anyone who enjoys mage battles or more traditional sword-and-spear work should read these books.

I suppose I should mention Isley. Poor Isley, held as both prisoner and revered favourite of the Emperor, a gloriously mixed-up situation. She has all the self-deluded pathos that should elicit sympathy, but somehow I can’t quite forget how evil she was in the previous book. She feels a little like a plot device — someone positioned so that the reader can discover just what the Emperor is up to, and (possibly) to link to some dramatic revelation in the final book.

This is a beautifully written book, with interesting characters, great action scenes, a well-thought-out plot and excellent pacing. There are some huge reveals at the end that I just didn’t see coming, including one that made me cheer and one that had me open-mouthed with shock. So why only four stars? It really comes down to personal preference. I’m not a huge fan of long-drawn-out battles. With the escalation in the war, it was inevitable that the battles would be intense, but I found there was a little too much describing who was doing what to whom. With wielders, there’s no end of Pushing and Pulling and Reaching, and sometimes I just wanted to know what the characters were feeling. In general, I wanted a stronger emotional engagement. There were times when I got it — the exhibition in Thaya, for instance, and Pathius and Ara in Imara — but there were also times when I felt detached from what was going on, and moments when I should have been affected by an event, but really wasn’t. But that’s just me, and it shouldn’t put anyone off reading an excellent book. A good four stars. I highly recommend this series.