As you may know, I’ve recently begun a new writing venture, breaking away from fantasy for a while to write a series of Regency romances, of traditional style. Like Jane Austen’s works, they focus on the serious business of young ladies looking for husbands and the difficulties they encounter along the way. I can’t copy Austen’s elegant writing or her wit, but I have tried to impart a flavour of the Regency era and the mannered lives of its upper-class residents, while injecting some humour. And like the originals, the story ends with a proposal and acceptance, nothing more, although I have taken the liberty of sealing the happy ever after with a kiss.

The series is called The Daughters of Allamont Hall written under the pen name Mary Kingswood and there will be six books in all, each focusing on a different daughter and her search for the perfect husband. There will also be some amusing and (I hope) interesting characters running through the whole series.

Book 1: Amy will be released on 15th July 2016, with Book 2: Belle on 12th August, Book 3: Connie on 9th September. The remaining stories, Book 4: Dulcie, Book 5: Grace and Book 6: Hope will follow not far behind. The first three are available for pre-order from Amazon now — click the covers below to go to your local Amazon to order.  If you’d like more information, or to sign up for the Mary Kingswood newsletter, hop over to the Mary Kingswood website. 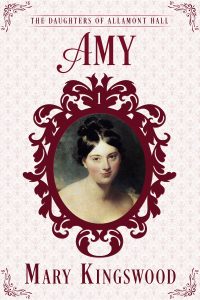 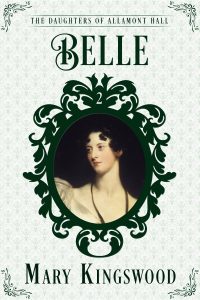 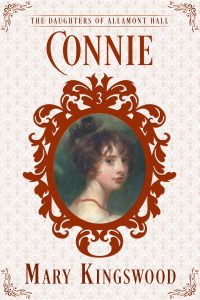 Mr William Allamont rules the lives of his six unmarried daughters with strict regularity. Every hour has its appointed task, every day its routine, lest the girls fall into idleness and frivolity. When he dies unexpectedly, his will includes generous dowries for the sisters, but only on condition that they marry in the proper order, the eldest first.

Amy must now find herself a husband, and soon, so that her younger sisters may also have their chance of marriage. There are several possible suitors, but will any of them come up to scratch? And how can Amy choose for herself, when she has always been guided by her father’s strict rules? Will she be able to manage without him to direct her?

Mr Ambleside has been waiting for Amy for years, his suit rejected by her father. Now he has his opportunity, and he’s determined to win her. But first he has to see off his rivals, and if he manages that, he has to overcome her reluctance to defy her father’s wishes. But he’s a very tenacious man…

And now back to fantasy, and the editing for the final part of the Fire Mages Trilogy – The Second God, which will (hopefully) be released on 23rd September 2016. If you enjoyed The Fire Mages and The Fire Mages’ Daughter, you won’t want to miss this dramatic conclusion to the story of Drina, Arran and Ly.