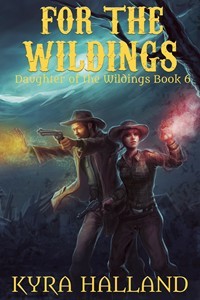 This is the sixth and final part of the Daughter of the Wildings series. I’ve been trying to think how many series I’ve managed to keep up with for six books, and it’s not many. A couple of murder mystery series, perhaps. But in fantasy? Nope. I rarely even get beyond the first book, and only a few stand-out series keep me hooked for a trilogy. So it’s a testament to the strength of the author’s writing that I’ve read and enjoyed every word of all six books.

It was the premise that first caught my eye. Wizards and magic combined with old west cattle ranching and guns? Count me in! And the stories were just as good as I’d hoped. Leading man Silas is a true western hero, tough and determined, but a real gentleman too. His lady, Lainie, is his equal in every respect, and maybe, just maybe, has a little bit more magical power, even. There are villains and good guys and others who veer about from one side to the other. And there are horses and saloons and dried up creeks and flash floods and all the other good stuff that goes with westerns. And wizard battles! What could possibly be better?

At the end of City of Mages, Silas was ill and without his magical power, but Lainie had managed to get him back to home territory. Now she has to find a safe place for them both to hide while she tries to heal him, and help him recover his power. And wouldn’t you just know it, but the dastardly villains are still on their tail, and this time if things go wrong, the whole Wildings will be lost and its people will be slaves. So the stakes couldn’t be higher.

Once again it falls to Lainie to be resourceful and create new ways of combining her magical abilities to defeat the bad guys, but this time she’s not on her own. I love the way Lainie and Silas work together with magic and plain common sense — they make a great team! It’s probably not much of a spoiler to say that things work out pretty well in the end — I was very, very happy with the outcome.

I’ve enjoyed all the books in the series, but if I had to choose a favourite, it would be Book 5, City of Mages. Partly it was because it took us to a different part of the world quite unlike the cattle-ranching Wildings, which was an exciting change. Partly also because Silas was out of commission for most of the book, so Lainie had to step up and show just what she could do single-handed, which was pretty spectacular. And partly, of course, because of that awesome wizard battle — Lainie against nine powered-up mages. Brilliant stuff.

But, as with all the best series, the whole is greater than the sum of the parts. Like all the author’s books, the world-building is exceptional, and each book reveals a little more of the complexities of the various cultures, and the several different forms of magic, which all make perfect sense. The characters change and grow, book by book, as Lainie learns to use her abilities and gains confidence, and Silas learns to trust her and not over-protect her. Their romance is gentle and rather sweet. It’s a terrific read — highly recommended. Five stars for this book and the series.