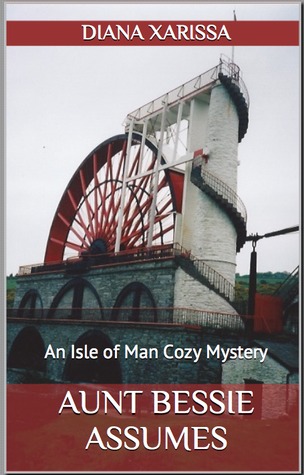 As cozy mysteries go, this is about as cozy as it gets. Aunt Bessie is a lady of bus pass age living beside the beach in Laxey on the Isle of Man. One morning she (literally) stumbles over a body on the beach, and, since she knows everyone on the island, she’s roped in by the police and her own curiosity to help solve the crime. As always, there are plenty of suspects, and all sorts of skeletons in closets to be revealed before the murderer is brought to justice.

There’s nothing fundamentally amiss with this book, and I was never tempted to abandon it. However, the pace is glacially slow, with inordinate amounts of unnecessary dialogue and repetition, and a great deal of page time is devoted to drinking vast amounts of tea and loving descriptions of every single food item passing Aunt Bessie’s lips. When she cooks, we’re treated to a blow-by-blow account of every ingredient and cooking utensil and process involved. It’s easy to read, however, and the odd Americanism felt reasonable to me given that Aunt Bessie grew up in the States.

As a mystery, let’s just say that my first guess was the correct one, and there were no challenging puzzles to unravel. For anyone who enjoys this kind of lightweight and undemanding story, there are plenty more books in the series, and the Manx setting is charmingly different. For me, it only rates three stars.