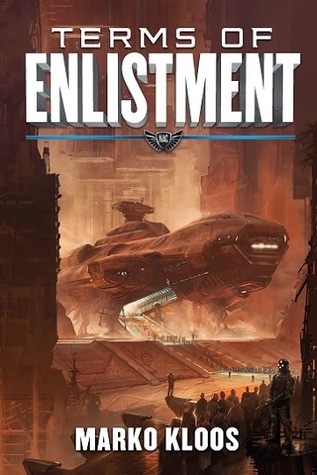 Oh boy. Military Sci-fi. Not something I would ever choose for myself, but I’ll try anything once. This is a mega-seller, so it must be hitting the spot for a lot of people. I have no point of comparison, but it seems to me like a well-written book of its type.The world-building is superb, and I never once doubted any aspect of it. The military stuff – well, if you like blow-by-blow battles, lots of explosions and guns and general mayhem of the blowing-stuff-up category, and a succession of we’re-all-doomed moments – this book is for you.

The characters? Not much depth, and to be honest I didn’t much care if any of them lived or died, even the hero. There was a love interest of sorts, but not a romance by any stretch of the imagination. But really, that’s not what it’s all about. It’s the set-piece battles that are the stars of the show, that and the technology, and both are very well described without ever being boring or two over-the-top melodramatic. This is a book about a vividly-created future world, every element of it utterly believable, and the dramatic shenanigans that one fairly ordinary recruit finds himself in. If you like military sci-fi, I’m guessing that you’ll love this book. It’s really not my cup of tea, but despite that, I finished it without effort. Three stars.

One response to “Review: ‘Terms of Enlistment’ by Marko Kloos”